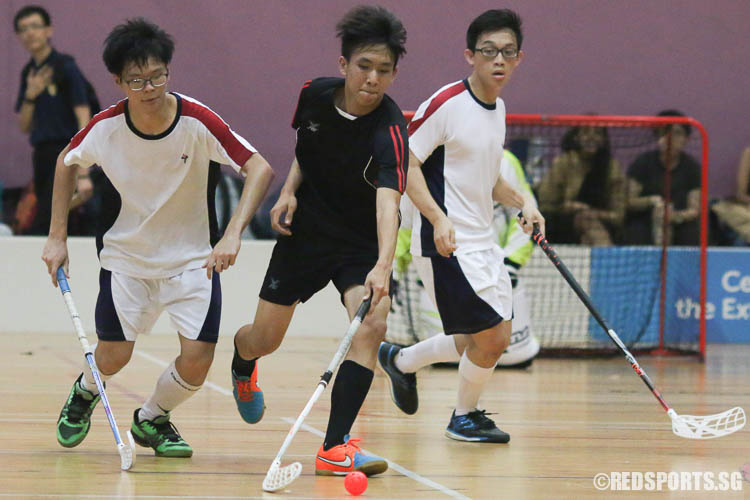 Ruel Tan (TPJC #22) about to send the ball towards goal. The TPJC captain bagged 3 goals in the game. (Photo 1 © Chua Kai Yun/Red Sports)

The win improves YJC to a 2-1-1 win-draw-loss record. YJC’s sole loss so far came in a 0-7 loss to Raffles Institution and they drew 2-2 with Anglo-Chinese Junior College.

This loss drops TPJC to a 1-3 record.

Ruel Tan (TPJC #22) was the top scorer of the game with three goals.

The first period saw four goals which left both teams tied at 2-2.

Muhammad Ismail bin Abdul Malek (YJC #6) then scored to give his team a 2-1 lead. A determined Ruel Tan (TPJC #22) then evened out the score to 2-2 with another goal.

In the last five minutes of the first period, the two team captains, YJC’s Muhammad Ismail (#6) and TPJC’s Ruel Tan (#22), found themselves sent to the sin-bin one after the other.

The second period turned out to be scoreless but the scoring resumed in the third, with YJC outscoring TPJC 3-1.

With seven minutes left on the clock, Chee Zheng Yang (YJC #31) slotted the ball into the goal, wrestling back the lead for YJC. This lead, however, was taken away again when Ruel Tan (TPJC #22) scored another goal for TPJC, making it 3-3.

From then on, YJC stepped up their game to score two consecutive goals through Hughie Chan (YJC #20) and Muhammad Ismail (YJC #6) to pull away and eventually take the 5-3 win.

YJC will next face off with HCI while TPJC will meet RI. Both games will be played on May 16 at Hougang Sports Hall.