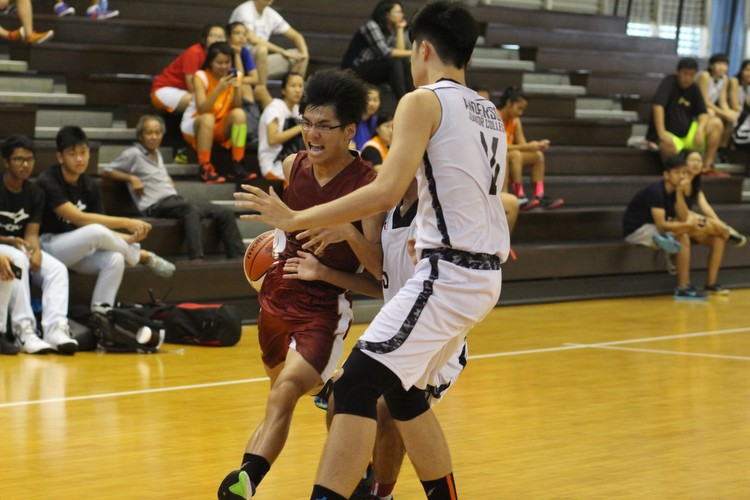 Yu Jinqing (SRJC #3) driving past his defenders. He was the top scorer for his team, scoring 9 points. (Photo 1 © REDintern Adeline Lee)

The win improves AJC to a 2-0 win-loss record after they had beaten Anglo-Chinese School (Independent) 68-22 in their opening game.

For SRJC, they fall to a 1-1 record, after having beaten Catholic Junior College 45-21 in their opener.

SRJC played a half court defense which forced AJC to attempt 3-pointers. While SRJC were able to bag their defensive rebounds, they were unable to capitalize on them as AJC were quick to intercept their passes, go on fast breaks, and score.

SRJC attempted to penetrate AJC’s man-to-man defense by driving in but AJC managed to block. However, this led to AJC fouling SRJC quite a few times. As a result, SRJC were able to reduce the deficit through their free throws.

The third quarter saw AJC playing a full court defense which SRJC was not able to penetrate. SRJC resorted to shooting from the 3-point line, but AJC dominated the rebounds to score.

Both teams were equally adept at intercepting each other’s passes but it was AJC who made the most of the turnovers to score.

AJC also scored on layups after getting through a porous SRJC defense to lead 34-17 heading into the fourth quarter.

Learning from their mistakes, SRJC tightened their defense in the fourth quarter. This made it difficult for AJC to drive in and score. However, AJC used their taller players to better effect, and they had their highest scoring quarter with 21 points to wrap up the 55-30 win.

AJC Roster
Please leave the names and the jersey numbers of the players below. We will update the story accordingly. Thanks.