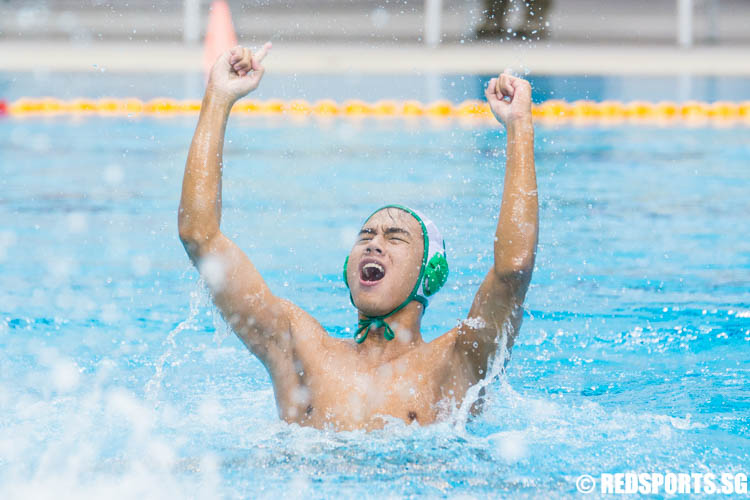 OCBC Aquatic Centre, Thursday, April 7, 2016 — The spectators were kept on their feet for most of the game as Raffles Institution (RI) and Hwa Chong Institution (HCI) finished 6-6 at full time. In the ensuing penalty shootout, RI eventually beat HCI 4-2 to take home their first National A Division Water Polo Championship title since 2012.

HCI had the edge in the first quarter as they penetrated the RI defense with their short, quick passing. The HCI defence also made it difficult for RI, forcing them to hesitate and use up the shot clock. HCI led 2-0 at the end of the first quarter through goals by Darren (HCI #9) and Jeng Wei (HCI #12).

The RI defence tightened up in the second quarter, forcing HCI into long-range attempts which their goalkeeper, Bryan Yip (#1), handled comfortably.

RI moved the ball well and managed to find space to get a clear looks at goal, and this tactic paid off when Finian Koh (RI #9) and Benedict Yeo (RI #8) were able to score a goal each to tie it up at 2-2.

However, HCI managed to find a loophole in the RI defence when Yin Jie (HCI #5) scored a goal to take back the 3-2 lead with 14 seconds left in the second quarter.

In the third, a momentary lapse in the HCI defense allowed Aaron Tan (RI #2) to equalise at 3-3 with three minutes left in the quarter. However, Chester (HCI #6) took back the lead for HCI at 4-3 with a goal.

Both teams continued to trade goals in the fourth quarter. RI came right back again with an equalising goal through Finian (RI #9) but Justin (#8) of HCI again grabbed back the lead at 5-4.

With two minutes left to the game and the score at 6-6, both teams desperately tried to score the winner, but the respective goalkeepers kept out any attempts.

In the ensuing best-of-five penalty shootout, RI and HCI managed to score from their opening penalties. However, HCI missed their next two penalties while RI scored one. While HCI finally managed to score with their next one, Benedict (RI #8) also scored to wrap up the championship title win.

RI captain Jared Lim (#4) said, “We knew that it was not going to be easy and it was a hard-fought victory. We had a decent start to the season but we had our ups and downs. It was a good thing that we managed to keep a consistent performance throughout all the games.”

RI vice-captain, Bryan Yip (#1), added, “We were all very ecstatic and it was a good win. Both teams played really well. Hwa Chong is really strong but I guess we wanted it more and we managed to clinch the win.”