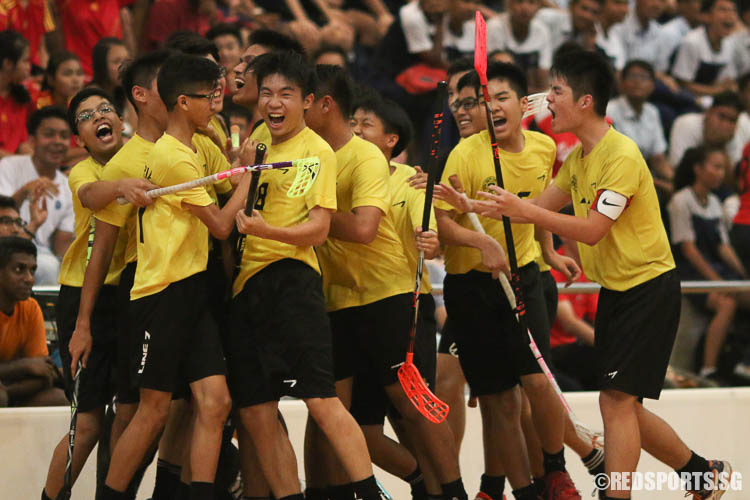 Victoria School players roared in jubilation as Adib Fahim B Norishaam (VS #47) scored the winning goal just 39 seconds before the end of the game, securing the championship title. (Photo 1 © Chua Kai Yun/Red Sports)

Yishun Sports Hall, Wednesday, April 6, 2016 — East View Secondary (EVS) came back twice from a goal down in the final, but Victoria School (VS) eventually triumphed 3–2 to emerge as champions in the National B Division Boys Floorball Championship.

In the semi-finals, VS had beaten Coral Secondary 8–5 while East View had edged past Bukit Merah Secondary 5–3.

The final got off to a quiet but tense opening period, as both teams took a while to get into their groove. As for East View, it was partly due to the fact that their student supporters were yet to arrive in the sports hall – thus it was quite a morale-dampener that the venue was only filled with deafening Victoria School cheers for the entire Period 1.

VS had the slight upper hand in the opening exchanges, with their best chance coming seven minutes in – through a swift counter attack, VS found themselves 2-on-1 with the East View goalkeeper, but Darius Phua (VS #67) had his shot saved brilliantly.

With two minutes left in Period 1, Joel Sim (VS #71) then shot from just inside the D, but once again the East View goalkeeper was equal to the task.

With 1:04 to go, VS finally earned their reward as they opened the scoring. It came from a brilliant counter attacking move where Ammar Khairudin (VS #62) teed up Muhammad Ihsan (VS #63) on the left, who then sharply shot into the top corner of the goal.

By the time Period 2 began, the East View student supporters had finally filled up the spectator stands – complete with enthusiastic cheers and an eagle mascot – and it seemingly breathed new life into the East View team as they appeared more spirited to get back into the game.

Deservedly so, East View equalised seven minutes into Period 2. Koh Xuanrui (EVS #4) received the ball on the left wing, then shot the ball in from outside the D.

With two minutes to go in the period, Xuanrui once again tested the VS goalkeeper with two low long-range shots in quick succession but unfortunately could not convert.

His misses proved costly as just seconds later, Ng Jun Wei (VS #76) received a pass from the right from Ryan Tham (VS #72) and slammed it home, making it 2–1 to VS.

With five seconds left on the clock, Azhari Saputra (EVS #77) then missed a golden opportunity to equalise right in front of goal, as he was under pressure from a VS defender.

The final period proved to be a fiery affair, as both teams started being aggressive in stealing ball possession and letting fly shots from every corner of the court. East View were desperate for the equaliser, while VS showed that they were far from done, coming close on several occasions to extend their lead.

Just a minute into Period 3, Muhammad Ihsan (VS #63) crossed from the left to Joel Sim (VS #71), but the latter’s shot struck the crossbar.

With 9:44 to go, East View found their equalising goal instead to make it 2–2, to cue jubilant cheers from the East View supporters. Aqil Adli Yashir (EVS #87) unleashed a long-range shot from the left wing, and after the ball rebounded off the boards behind the goalposts, Azhari Saputra (EVS #77) then tapped it into goal.

The atmosphere in the sports hall thereafter was buzzing as both teams were in search of the winner while both sets of supporters tried to outcheer each other.

East View had a couple of golden opportunities, with their best chance arriving with 6:56 left on the clock. While being shorthanded with a player down, East View were sitting back in defense but Aqil (EVS #87) suddenly managed to break on the counter attack. With only the goalkeeper to beat, he agonisingly missed.

Just when everyone thought the match was going into a penalty shootout, VS finally secured the win with a last-gasp winner 39 seconds from time. After a scramble in the D, Adib Fahim (VS #47) slammed the ball home to send the VS supporters into a frenzy.

There was an anti-climatic ending to the match, though, as the clock was mistakenly let to run when the referee had in fact blown for a foul on an East View player with five seconds to go. It led to the VS supporters enthusiastically counting down to zero and subsequently streaming in hordes onto the court to embrace their floorball heroes.

After the match officials and VS teachers-in-charge had managed to get hold of the situation and clear the chaos, East View still had a do-or-die set-piece with 0:05 left on the clock. Unfortunately, East View failed to convert, confirming VS’s victory.

When asked about the team’s source of motivation, VS captain Ryan Tham (#72) remarked, “It was about two years ago, when the same team lost during the semi-finals (in the C Division). From then onwards we wanted to get back the trophy and two years later we managed to do so. What pushed us on is the desire and hunger for the trophy and because of the supporters who came all the way down – they really played a big part for our win today.”

“What I’m most proud of about this team is our fighting spirit. We never gave up. We didn’t really trail but there were times where we were on the backfoot but we managed to make a comeback,” he added.

The title win was Victoria School’s second ever in the B Division. In last year’s championship, they had finished as runners-up to Catholic High School.

VS won 10 and lost one of their games en route to clinching the title, while East View finished the championship with a decent 8–2–2 win-draw-loss record.