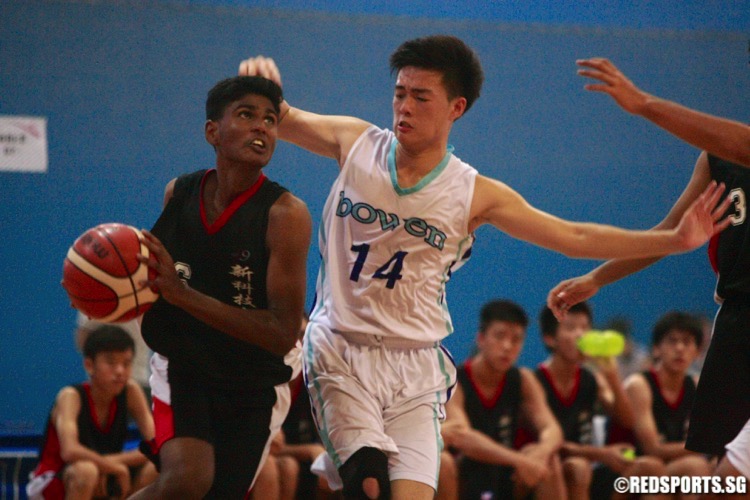 Clementi Sports Complex, Tuesday, April 5, 2016 — Despite trailing behind for most of the game, School of Science and Technology (SST) did not lose heart and managed to stage a comeback in the fourth quarter to beat Bowen Secondary (BWS) 46-45 in the National B Division Basketball Championship.

Bowen played a zone defense which forced SST to make unsuccessful attempts from the 3-point line. Furthermore, Bowen were also able to bag defensive rebounds and convert them into points.

Bowen’s offense proved equally swift as they were able to penetrate SST’s defense and score points. As a result, Bowen led 15-10 at the end of the first quarter.

Bowen’s strong offense was a result of teamwork. They were able to make accurate passes and they constantly ran to find space to drive in and score. Thus, Bowen continued to widen the lead in the second quarter.

To counter Bowen’s offense, SST became more aggressive in their defense. This led to them bagging more of their defensive rebounds but they were only partially successful in converting them into points.

Not only that, SST’s defense proved too aggressive as they fouled Bowen quite a number of times. Hence Bowen had a chance to widen their lead through their free throws. Bowen led 28-17 at halftime.

In the third quarter, SST changed to a half court defense. This was only partially successful as this tactic left their defense slightly porous which Bowen took advantage of.

Bowen were not without their mistakes, as they allowed SST to intercept their passes, go on fast breaks, and score. Furthermore, SST became swifter in their offense and aggressively drove in instead of attempting 3-point shots.

Bowen’s offense still had the edge over SST, and they led 35-27 heading into the fourth quarter.

The fourth quarter saw both teams making a lot of careless mistakes. This time, SST capitalized on Bowen’s mistakes and they managed to reduce the deficit to three points (32-35). However, Bowen remained calm and maintained their lead for the first five minutes of the quarter.

The Bowen defense, which had prevented many SST scoring attempts in the earlier quarters, lost its potency. This allowed SST to catch more of their offensive rebounds to reduce the deficit to just one point (44-45).

With less than two minutes left to the game, Bowen desperately tried to keep their minuscule lead. However, they were unable to prevent Mahidhar (SST #16) from scoring a lay-up to finally give SST the lead in the game at 46-45.

Bowen had the chance to take back the lead and grab the win in the closing moments but a missed layup allowed SST to hold on to beat Bowen 46-45.

SST captain, Thomas(#6), said, “We were sort of the underdogs in this game, but I think in the last quarter we managed to step it up. I hope we can continue playing well for the next few games of this round. Getting this far is already historic for our school and we hope to build on this legacy. We have already surpassed our team goal, so from now on we will just give our best for the next games.”