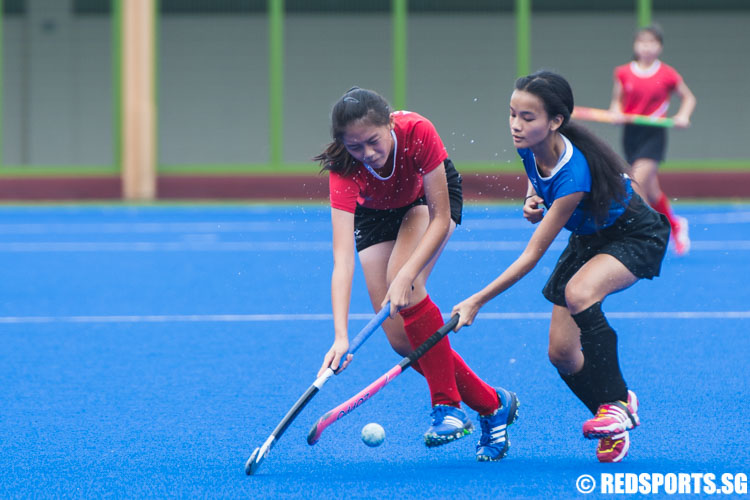 Players from both schools contest for possession of the ball. (Photo 1 © Jerald Ang/Red Sports)

Teck Whye end their season with a 2–2–3 win-draw-loss record while Seng Kang finished with a 2–1–4 record.

When the two sides met earlier in the preliminary round, Seng Kang had edged the tie 1–0.

A similar tight and tense affair ensued in this game, with very few clear-cut chances being created for both teams as both goalkeepers were seldom tested. Seng Kang dominated possession in the first half, but could not convert their attempts at goal. Their best chance came five minutes before half-time – from a penalty corner, SKS #6 had her shot deflected narrowly wide off the post.

In the second half, Teck Whye became more adventurous in attack, probing forward more often as Seng Kang chose to sit back and play on the counter. Unfortunately, both teams still failed to break the deadlock as the game remained scoreless at full-time, calling for two more halves of five minutes each to be played.

At the start of extra time, Teck Whye had two penalty corners in quick succession but could not convert. Teck Whye continued to be the more likely to score in the remaining few minutes of the game, but Seng Kang also looked equally threatening each time they surged forward on the counter.

Alas, it finished 0–0 after extra time and the dreaded penalty shootout ensued. Penalty-takers had eight seconds to get the ball into goal from the 23-metre line.

SKS #3, TWS #48 and SKS #6 missed their penalties to keep the atmosphere tense before Qurratu’aini Bte Azhari (TWS #34) pushed the ball forward, paused cleverly then swept it low into goal to cue some boisterous cheers from the Teck Whye student supporters seated on the sidelines.

The following three penalties – by SKS #7, TWS #31 and SKS #12 – were missed or saved as the supporters continued to hold their breaths. Siti Arina Bte Muhamad Razid (TWS #54) then stepped up, surged forward, deftly turned with her back facing goal before slotting the ball in, sending the Teck Whye faithful into euphoria.

On her team’s performance, Qurratu’aini (TWS #34) remarked, “At first I think the team didn’t really play that well, because we were not really awake and we weren’t much prepared. But as time went by, we began to play well up till the penalty shootout.”

The championship will come to a close on Thursday, March 31 at Sengkang Hockey Stadium as CHIJ St. Theresa’s Convent and CHIJ St. Nicholas Girls’ School battle it out for the title.

Teck Whye Roster
N.B. If you know the names and jersey numbers of players from both teams, please leave it in the comments section. The article will then be updated accordingly. Thank you!

Seng Kang Roster
N.B. If you know the names and jersey numbers of players from both teams, please leave it in the comments section. The article will then be updated accordingly. Thank you!