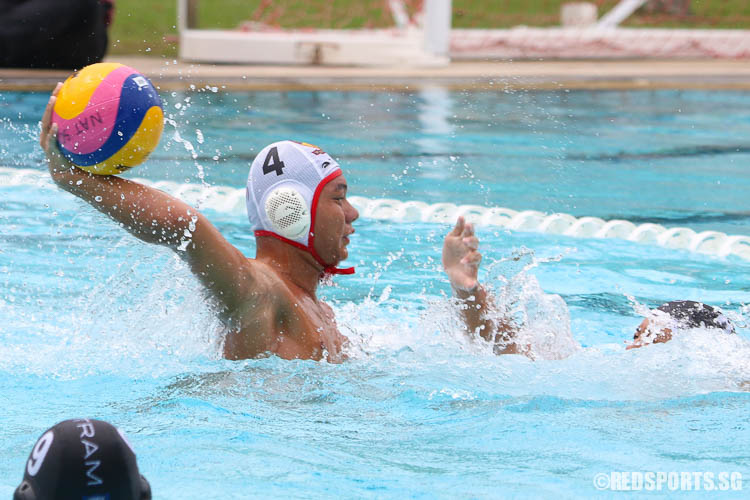 ACS(I) last won the title back in 2014, and this is their sixth B Division title in the last 10 years.

For Outram, they began their season with a 15-4 win over St. Andrew’s. They lost to Hwa Chong Institution (9-11), before resuming their winnings ways with wins over RI (8-6), ACS (Barker) (7-6). The final Round 1 game was the loss to ACS(I). They qualified for the gold medal playoff after finishing second in the group behind ACS(I).

The first three minutes of the final saw ACS(I) and Outram match each other. The first goal was scored by ACS(I) goalkeeper, Sean Sng (#1).

Accurate passing saw ACS(I) get past Outram’s defense with Joshua Ong (ACS(I)#11) and Joseph Cheng (ACS(I)#7) scoring a goal each Sean (ACS(I) #1) kept a clean sheet in the first quarter and allowed ACS(I) to take a 3-0 lead into the second.

Despite trailing, Outram remained calm and managed to score two goals in the second quarter. However, ACS(I) added another two of their own to lead 5-2 at half time.

Tight defense and good goalkeeping meant a scoreless third quarter and the score remained at 5-2.

Outram went all out in the fourth quarter to chase the game. However, excellent goalkeeping by Sean (#1) in the ACS(I) goal, saving six out of seven Outram attempts, kept Outram at bay. The one goal he gave up was not enough for Outram to overcome the deficit and ACS(I) wrapped up the 5-3 win.

ACS(I) captain, Sean Sng (#1) said, “I am really proud of my teammates and I think that we played really well today. We have been progressing well since the first game and our teamwork has gotten much better.”

In the playoff for third place, RI beat HCI 6-5, after coming back from 1-5 down.