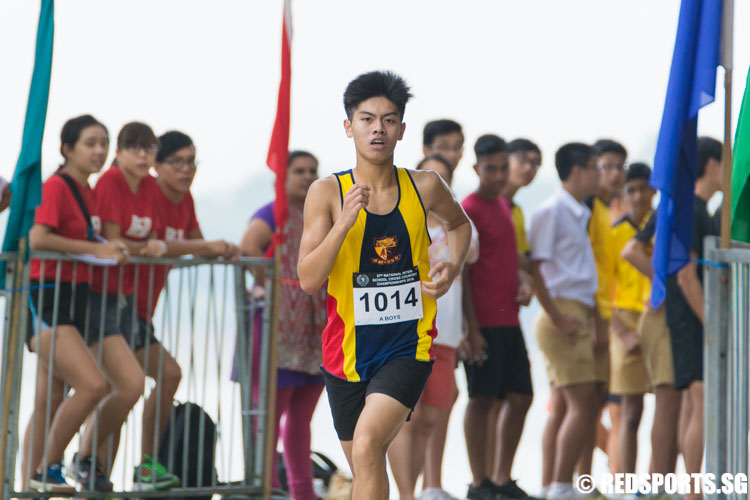 Isaac Tan of Anglo-Chinese School (Independent) emerged as the individual champion with a timing of 16:15.07. (Photo 1 © Jerald Ang/Red Sports)

Although Isaac had a clear lead throughout, there was a dramatic end to the race, as he stopped dead in his tracks 20 metres from the finishing line, thinking he had crossed it. Extremely exhausted and hunching forward, he leaned against the railings at the side, prompting some shocked supporters to frantically shout at him to go on. Looking dazed and confused, he took a quick look around and continued with a slight jog to the finish, where he collapsed, with a few race officials rushing to help him.

Explaining the moment, the ACS(I) Year 5 student said, “Actually I was already dying in the last 1km, but I just kept moving on, and I looked back too to make sure there was still a gap. But at the finish, I saw two wires, so I thought I had finished. From there I didn’t see the ‘Finish’ banner so I stopped there. Then people were asking me to move on, so I did.”

On his race strategy, he commented, “I started fast this time – because in all the previous races I had been following behind Chong Qi. So this time I tried to push from the start in a change of race plan. I led from the start then up the slope, I managed to open up a gap. From there, I didn’t really know what was happening behind but I felt that the gap was increasing, and so I went all the way to the finish.”

Isaac also paid tribute to his support network, saying, “I would like to thank my whole team; our team was really strong. Charles, Daniel, Jonathan – they did great today. Also my coach, my teachers – they trained us well.”

Meanwhile, the defeat was clearly hard to take for Chong Qi, who had also finished second last year in the A Division, behind already-graduated senior Shohib Marican. After taking awhile to gather his thoughts, Chong Qi commented, “I was behind Isaac all the way. It was a bad race for me, because in a sense I gave up at the midway point – I thought he would die off; I overestimated myself thinking I could catch him after a while. But then after the slope he just pulled away and I gave up.”

“It hurts … it hurts really bad. When you know the team title was only (two) points away – like just one position higher for any of our four runners (ahead of an ACS runner) would have won us the team title. I think it’s quite a bad loss … but in life you win and lose,” he added.

The season is far from over for Chong Qi, who will look to pick himself up from here for the upcoming National Schools Track and Field Championships, which starts from April 13. He is likely to take part in the 3000m steeplechase and 5000m events, and is aiming for nothing less than gold for both. “This time round, I won’t be giving up,” he exclaimed.

As for Isaac, he will likely run the 1500m and 5000m events, but said that he will not really focus on training for the latter event. For the 1500m, though, he is gunning for gold.

The last four winners of the boys’ A division cross country individual title (Karthic Harish Ragupathy in 2012-2013 and Shohib bin Abdul Wahab Marican in 2014-2015) have gone on to win two more individual gold medals each year at the National Inter-School track and field meet.