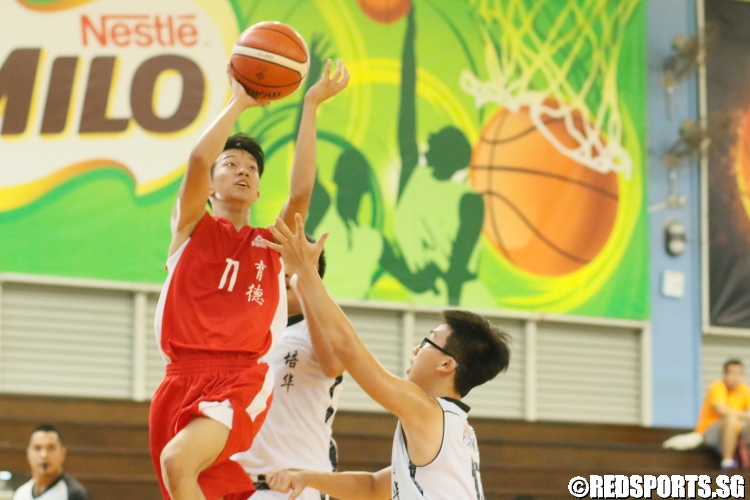 Singapore Basketball Centre, Wednesday, February 17, 2016 — Edgefield Secondary claimed a 68-43 victory over traditional powerhouses Pei Hwa Secondary in the 2nd round of the North Zone B Division Basketball Championship, thanks to a strong first half performance.

Ezra (#11) led Edgefield to victory with a game-high 23 point performance, while Ringo Yim (#6) and Nicholas Lee (#4) led Pei Hwa in the scoring column with 8 points apiece.

With the conclusion of this match, both teams have a win-loss record of 1-2 in the 2nd round of the North Zone B Division Basketball Championship. Both teams are out of contention for a semi-final appearance.

Pei Hwa started the game with their focus on scoring outside the paint, shooting from beyond the paint whenever they had a open look. However, their offensive game plan backfired as their shooters were cold and could not convert open looks outside the paint. This led to long defensive rebounds for Edgefield that allowed them to score easy fast break points. Furthermore, Edgefield’s tight defense limited scoring opportunities for Pei Hwa in the paint. As a result, the first quarter ended 20-11 in favour of Edgefield.

Smelling blood in the water, Edgefield entered the second quarter with extra aggression on offense, relentlessly attacking the paint with strong drives to the hoop for points in the paint. With his height and size advantage, Shi Yu (Edgefield #12) made his presence felt in the paint on the offensive and defensive end, grabbing rebounds that sparked fast breaks and earned Edgefield second chance points.

At halftime, the Edgefield widened the scoreline to 37-19 as they outscored Pei Hwa 17-8 in the quarter.

Pei Hwa’s shooting from outside the paint started to heat up in the third peiod, as their shooters started to make their shots at a higher percentage. Nicholas Lee (#4) was the offensive spark for Pei Hwa as he made 2 3-pointers in the third period alone. However, Pei Hwa continued to struggle with limiting fast break points by edgefield as they struggled with their transition defense. At the end of the third period, Pei Hwa trailed by 26 as the scoreline stood at 59-33 in Edgefield’s favour.

In the final quarter, Pei Hwa had their best defensive performance in the game, with their tightened defense limiting Edgefield to only 9 points in the period. However, the 26 point deficit proved to be too much to overcome as Pei Hwa were only able to outscore Edgefield 10-9 in the final quarter. At the final buzzer, Pei Hwa fell 43-68 to Edgefield.