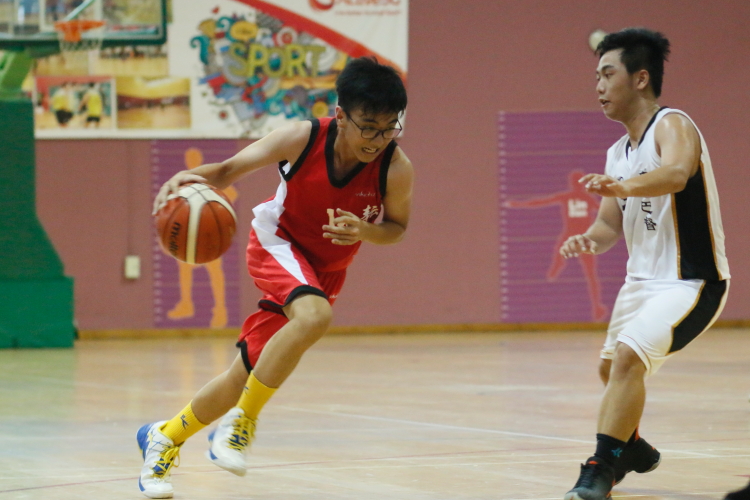 Clementi Sports Hall, Wednesday, February 10, 2016 – Yuan Ching claimed a 35-15 victory over Bukit Batok in what was the final game for both teams this season in the West Zone B Division Basketball Championship.

With this win, Yuan Ching’s season concluded with a 2-2 record while Bukit Batok’s season ended with a 0-4 record, spelling elimination for both teams. Boon Lay and School of Science and Technology finished first and second respectively in Group E of the preliminaries.

In the opening quarter, Bukit Batok moved the ball fluidly around on offense in an attempt to create good looks at the basket, but they were met with Yuan Ching’s organised defense which led to Bukit Batok making a low percentage of their shots.

On the other hand, Yuan Ching found more success on offense, where their fluid ball movement led to easy baskets. As a result, the opening quarter ended with Yuan Ching leading 7-4.

Determined to take control of the game, Yuan Ching entered the second quarter with an imposing full court press, earning easy fast break points while forcing turnovers by Bukit Batok. Even when Bukit Batok did not turn the ball over, they found themselves struggling to find good looks at the basket. As a result Bukit Batok only managed 2 points in the second period.

Yuan Ching also turned up a notch on offense, where they constantly swung the ball around the court for easy baskets in the paint and open looks from long distance. At half-time, Yuan Ching led 14-6.

After the half-time break, Bukit Batok were able to adapt to Yuan Ching’s full court press and minimised their turnovers. However, Bukit Batok were still unable to make shots at a high percentage, as good looks at the basket were hard to come by against the Yuan Ching defense.

On the other hand, Yuan Ching started the third quarter struggling with their shooting as they relied heavily on perimeter shots. After a timeout with 2 minutes left in the quarter, Yuan Ching switched into attck mode, where they aggressively attacked the paint for high percentage shots. At the end of the third period, Yuan Ching were in control as they led 25-11.

It was more of the same in the final period, as Yuan Ching relentlessly attacked while locking up on the densive end, limiting Bukit Batok to 4 points in the closing period.

Even though the game was out of reach for Bukit Batok, they continued to hustle for every possession and played with heart until the final whistle, where the scoreline ended at 35-15 in Yuan Ching’s favour.