North Zone B Div Bball: Edgefield off to strong start with 70-17 win over Fuchun 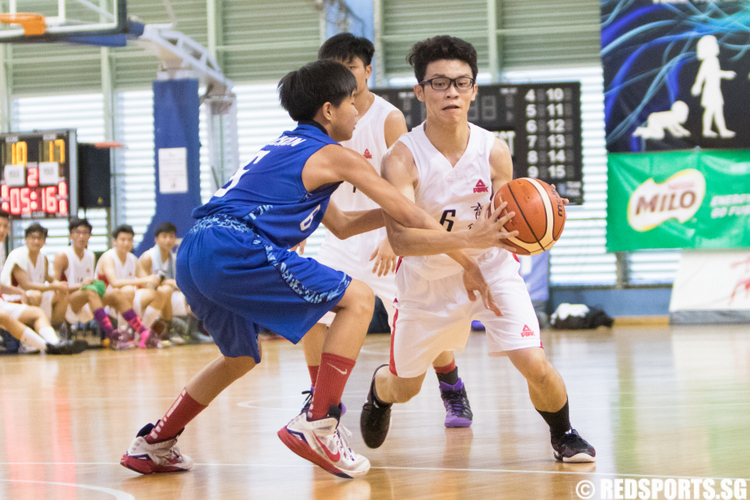 Singapore Basketball Centre, Wednesday, January 13, 2016 — Beginning with a strong lead that was steadily maintained throughout, Edgefield Secondary defeated Fushun Secondary 70-17 in their opening match of the North Zone B Division Basketball Championship.

Bryan (Edgefield #14) led with a game-high of 18 points, followed closely by his teammate Ng Shi Yu (Edgefield #12) with 16. Chee Heng (#6) of Fuchun led his team with eight points.

Within 15 seconds of the starting buzzer, Edgefield captain Ng Shi Yu (#12) scored the team’s first basket to get the scoring going.

This was followed swiftly by a neat three-pointer from Ashley (Edgefield #10) and then yet another basket by Shiyu (Edgefield #12), putting the team up 7-0 in just under 5 minutes.

Shiyu scored with the next two shots, and Edgefield pulled away to an impressive 21-0 lead with 3 minutes of the first quarter to go with baskets from Bryan (Edgefield #14), Ezra (Edgefield #11) and Adam (Edgefield #7).

Yet despite the widening score gap, Fuchun continued to press on, with Chee Heng (Fuchun Sec #6) finally scoring the team’s first goal in the last minute of the first quarter.

In the third quarter, Ezra (Edgefield #11) stole the show, scoring eight points for his team with his sprints across the court.

Edge field pulled away in this quarter with their quick reflexes and teamwork, but Fuchun did not falter in spirit though they had only eight players on their roster as they tried their best despite their visible exhaustion.

Darren Lee (Fuchun #14) impressed with a three-point shot with just under 2 minutes to go, as Fuchun managed six points in the quarter. There was however no stopping Edgefield, as they wrapped up the game with a 70-17 win.

Edgefield captain Ng Shi Yu (#12) said, “My team has a lot to improve on, especially on our offence and defence as well as communication. We also need to be faster. However, it’s good that we managed to score well in this game.”