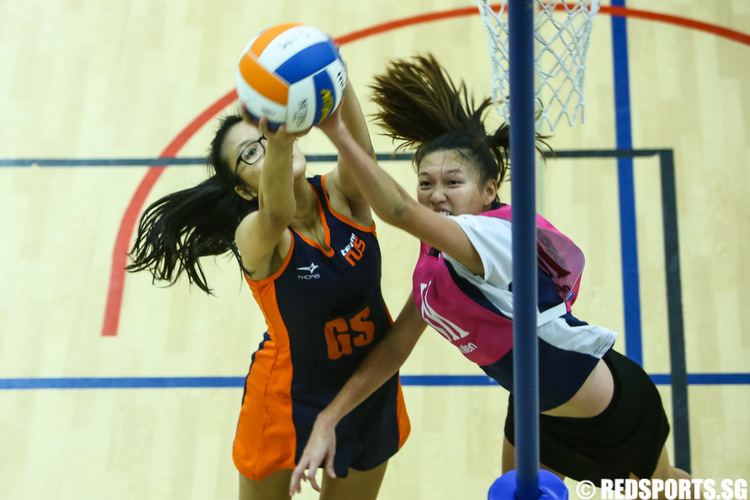 Singapore Institute of Management, Thursday, October 1, 2015 — Since the inauguration of the Singapore University Games (SUniG) netball championship in 2011, National University of Singapore (NUS) had always topped the competition, but the storyline in this year’s edition was different.

Having lost to Nanyang Technological University (NTU) in their round robin game, the inclusion of a final gave NUS a chance to make a comeback, which unfortunately was to no avail.

Led by SUniG debutant Shina Teo, NTU had their way against NUS and romped to a 62-52 win and their first ever crown.

“I came here with the mindset of helping my team take over the championship title and help my coach (Goh Seng Tuck), who has been coaching me outside at my club, and I’m very honoured to play with him again,” said Teo.

“We really worked well together as a team and planned our defence which worked in our favour. We set up quite a few defensive plays so that we can intercept the ball, which helped us on offence.”

On the possibility of meeting defending Institute-Varsity-Polytechnic (IVP) champions NUS in the upcoming Games, Teo said, “It’s time for us to step up our game to work and take away their championship title.

“The competition level will be higher if other teams win the title and there will be no show to watch if it’s always them.”

Teo’s defensive presence was a huge boost for NTU as she denied several entry passes to NUS’s shooters. She was assisted by Wing Attack Low Yi Lun on offence but things did not go their way in the opening quarter as turnovers allowed NUS to take a seven-point lead.

While things looked rosy for the defending champions, their happiness did not last long.

Despite the deficit, an undaunted NTU followed the poor display with superb defensive plays and rode the momentum of a 9-0 run and ran wild against their opponents.

Coupled with Low’s excellent entry passes to their shooters, NTU capitalized on their morale boost and gradually extended their lead. They waylaid NUS and eventually earned their 10-point victory.

“Naturally the loss is hard to take but it’s okay, because we’re a young team and most of us are in our first and second year,” said Wong.

“Our coach mentioned that we’re not strong enough physically, and we need to build up on our physical strength, which will help us build on our fitness levels as well.

“We still have a long way to go and we’ll definitely come back stronger for IVP and overcome them (NTU),” she added.