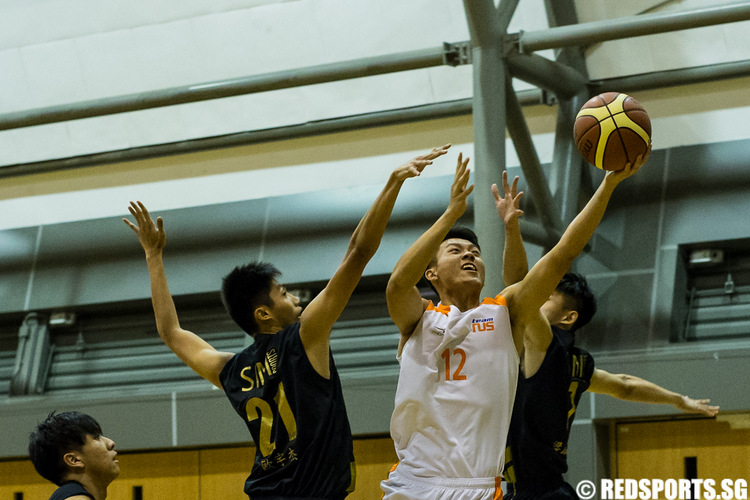 National University of Singapore, Thursday, September 17, 2015 — He came. He commanded. He conquered. He also instructed.

A double-double by national cager Lim Shengyu (#12) helped National University of Singapore (NUS) close out a flawless Singapore University Games (SUniG) men’s basketball championship season with a 80-62 win over Singapore Institute of Management (SIM) in the final, earning them their second straight title.

“This year, particularly, I got a lot of support from the team, be it on the court, tactically, spiritually and mentally,” said the forward.

“I grew and bonded with them and this season is unlike previous years where I had to run the show and I don’t think that’s the case anymore.

“I have a bunch of dependable team-mates that can play a good basketball game with me and try to win games with me.”

While pleased with the result, Lim (#12) highlighted that his team still had work to do when they return to training.

“Not everyone was mentally ready to play a great game and I don’t think we had a good first half,” he said.

“Nerves and stage fright led to unforced turnovers and the inability to finish easy baskets, I think that was holding us down for most of the first half.

“This boils down to experience and this has been a problem for NUS, because most of our players do not have external experience playing for clubs and leagues, so when it comes to the big stage where they know that families and friends are watching, many of us did not give our ‘A’ game.

“Fortunately, some players stepped up in the second half, and we managed to squeeze out a win, though not as beautiful as I imagined.”

While overshadowing SIM’s statistical leaders, Lim’s (#12) 20 points, 17 boards, four dimes and two blocks did not tell the full story of his dominance on the court.

The forward was also dishing out instructions and guiding his team-mates throughout the game.

Fellow Hwa Chong Institution and Bukit Panjang Government High alumnus Rolu Oyekanmi (#9) was one of the beneficiaries of Lim’s (#12) leadership, as the confidence boost propelled him to a nine-point performance, to go with seven assists.

“Before, he (Rolu) rarely saw any minutes in Hwa Chong, but now, we gave him the confidence and the leeway to take more shots and have a stronger presence on the court,” said Lim (#12).

“He enjoys it and he’s making full use of it to help the team and bring us this championship and we have confidence that he will continue to play well for the rest of his years in NUS.”

Both teams had their fair share of woes, with three-point specialists Richard Neo (SIM #7) and Jeremy Lee (NUS #11) having a dismal day from range, each converting only one of their several attempts.

However, Lee (#11) found comfort in opting for drives to the basket, which helped place him higher on the scoreboard.

While Jason Siow (#10) did well in containing Lim (#12) on the defensive end, his SIM team-mates could not step up on the offensive end, and once again, depended heavily on Neo (#7).

To make up for Neo’s (#7) poor shooting, centre Ow Yu Jie (#21) stepped up, recording a near triple-double of 15 points, 11 rebounds and eight blocks, but it was simply not enough to stop a surging NUS.

Lester Ng (#6) of NUS was clutch with just under two minutes remaining, knocking down 10 of 12 attempts from the charity stripe to extend an eight-point lead.

“I think we lost it in the third quarter,” said Neo (#7), who recorded 19 points and eight rebounds.

“When the game is tight, you really need to contain your opponent in the first five minutes of that quarter and that is quite crucial.

“We had a bad day today in terms of scoring, but I think the takeaway from today’s game would be our defence, which we did well in the first part of the game.”

He added, “But eventually, we ran out of steam and we allowed them to score some easy baskets to pull away. We’ll definitely train harder and come back stronger during IVP.”