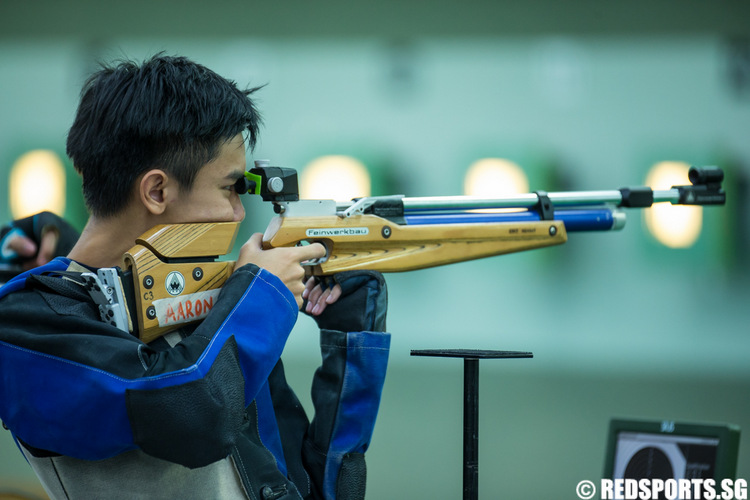 Fielding two shooters in the air pistol event and five in the air rifle events, the ACJC team participated in their first competition. With three months of training, they pit themselves against seasoned shooters from the Singapore Sports School and Singapore Shooting Association.

“We’re here mainly to gain exposure because we don’t know what the competition experience is like,” said captain Shamas Ong, who explained that there were only three other events a shooter could participate it – nationals, and the NUS and NTU Invitation Series.

“You come here for the stress,” said Marcus. “We’ll test ourselves here and then get ten months of training before nationals.”

While shooting looks like a static sport to most, Marcus described it as a mental game.

“You can’t care too much, but also can’t not care – you must find a balance,” he added.

Nerves got in the way of performance for Shamas, who had expected to do better, only to let his expectations affect his initial shots as his hand shook while raising his gun.

For his team, however, matching up to their more experienced competitors was not the point of participating.

“There’s no added pressure because there’s no intention to beat them. With each competition, I’m there to beat my personal best,” said Shamas.

The Singapore Youth Olympic Festival was first organised in 2011 for youth athletes aged 18 and below, and serves as a legacy of the inaugural Youth Olympic Games which was held in Singapore in 2010. In its fourth edition, the festival comprises nine sports held over two weekends from July 25 through August 2.