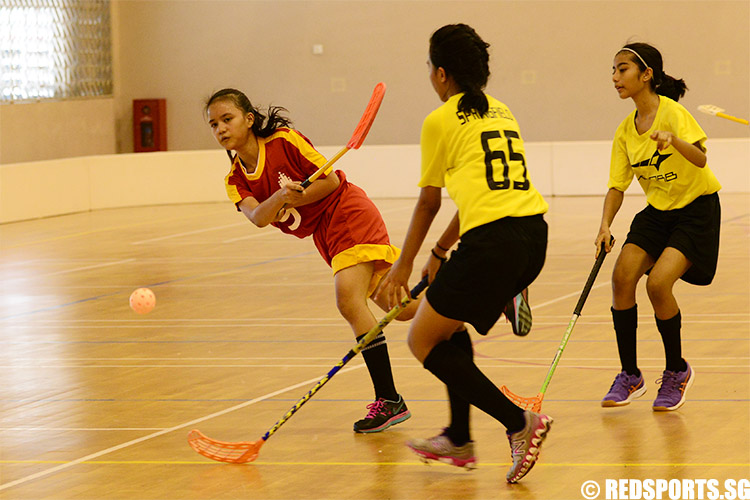 Siti Nasyitah Bte Abdul Rahim (BN #9) has a clear shot for the goal. She was the top scorer of the game with four goals. (Photo 1 © Louisa Goh/Red Sports)

Bedok South Secondary, July 23, 2015, Thursday — Bedok North Secondary triumphed 12–4 over Springfield Secondary to win their second game of the season. With one other loss under their belt, the team has one more match to play. Springfield have completed the first round with two wins and two losses.

The first period ended 4–2 in Bedok North’s favour, even after a last-minute attempt by Eka Nayla Atiqah (SF #59) narrowed the point gap. From then on, Bedok North pulled into the lead and maintained dominance during the game.

Bedok North opened the second period with with Sri Najiha (#19) scoring in the ninth second, and following up minutes after with a straight shot into the goal. Springfield’s Katherine Palacio Benedicto (#54) bravely fought off Bedok North’s attacks, but lapses in defence resulted in Bedok North persistently circling the goal.

Nurshaibah (SF #60) firmly kept the balls away from the goal as her team mates aggressively played into Bedok North’s half in an attempt to even the score. Tension on court was high as the ball volleyed back and forth, and Bedok North’s Yullya Izzati (#14) came close to scoring several times.

Siti Nuraisyah (SF #49) broke the impasse in the 10th minute as she capitalised on the confusion around the net with a close tap-in from the left. Siti Najiha (BN #10), however, swiftly answered seconds after as she ran past the defenders, lost her balance over Springfield’s goalkeeper and tapped the ball into the goal.

Springfield’s attempts after were constantly blocked, but Intan Nadhirah (#67) streaked across the court with a clear shot ahead, only to be stopped by the buzzer. The second period ended 7–3 in Bedok North’s favour.

The third period opened with Springfield’s defenders successfully clearing the ball away from the goal, but they were unable to seize the opportunities created to score as Nurain (BN #8) stepped in to steer them away.

Bedok North’s attacks came fast and furious in the third period, as Siti Nasyitah (#9) and Siti Najihah (#10) took turns to hound Springfield. Their attempts found the back of the net four times before Springfield’s Low Jing Hui (#48) replied with a hard shot that flew past Bedok North’s goalkeeper to bring the score to 11–4.

Springfield’s goalkeeper was pulled out in the last few minutes, and Bedok North seized the chance to add another goal. Jing Hui (SF #48) then fiercely protected the goal, preventing Bedok North from widening their lead to finish the game 12–4.

“We had previously lost to Springfield and other teams, so this was unexpected,” said captain Siti Najihah (#10). “I think we need to dribble more carefully, but I think we’ve improved on our defending.”