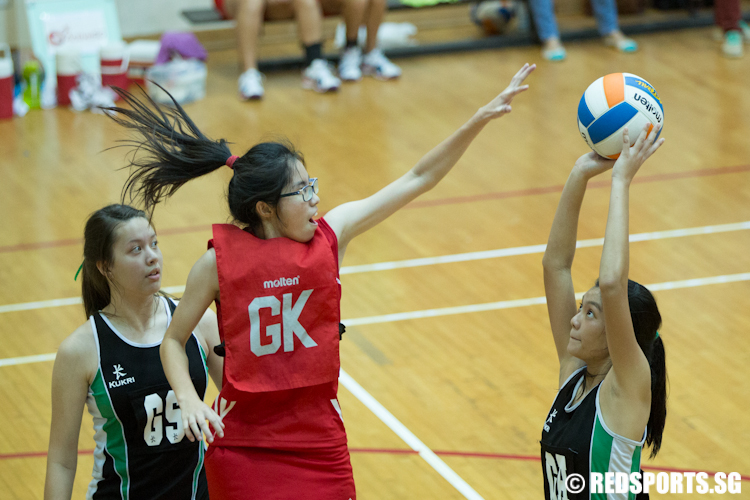 “They’re a very good team and they are constantly learning to be better,” said RI’s interim coach Goh Seng Tuck, who was temporarily at the helm as head coach Chng Li Li was away on coaching commitments with the national netball team for the upcoming 28th Southeast Asian Games.

Goh added, “I’m very happy, not so much with the outcome, but who the girls have grown up to be. We want to make sure that the skills will stay with the girls as they grow older, and I think that this is very important.”

RI established their dominance over the first-time finalists right from the start, as they blitzed to a 14–6 first-quarter lead.

RI’s offensive onslaught continued in the second quarter, as they held River Valley to just five points in the 15-minute frame.

RI’s goal defence Rukmini Roy and goal keeper Ayshath Zasella stood out in the second quarter with their defensive efforts and interceptions, as the pair contributed to 10 of RI’s 17 goals in the quarter.

After the break, despite her smaller frame, Yew Shuning stepped up on the defensive end for River Valley, denying several passes to RI’s goal shooter Isabelle Belangan.

Despite River Valley’s strong second-half play, the deficit was too large for them to close and RI sealed the eventual 54–29 victory.

“Getting the championship this year is a lot more sentimental to me because we worked really really hard this year,” said Tessa Wong.

The RI captain added, “Despite all the changes in coaches, I think the team coped and adjusted really well with these changes. This championship means a lot more to us than any other team defending the title again.”

Despite the loss, River Valley coach Puva Alahakone was all praises for her charges.

“They are fighters right through, all the way, and they played wonderfully as a team. They are resilient, and they have composure throughout the game.”

She added, “At the start, my girls were overwhelmed by a stronger RI team, but they came back in the second half and played an excellent game.”