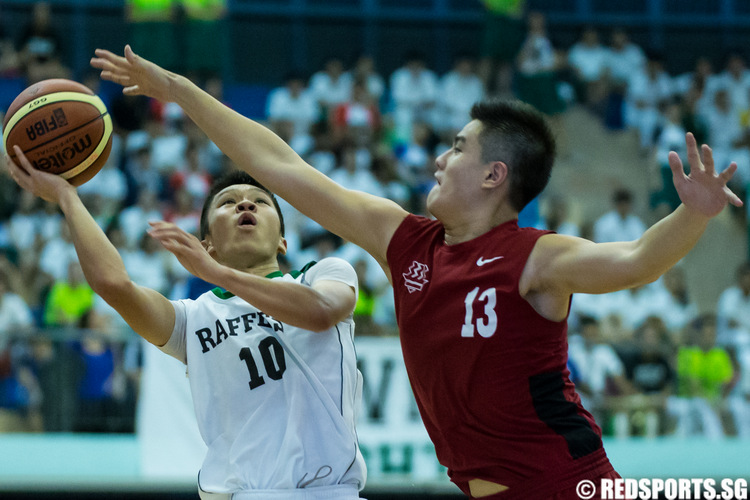 Justin Yeo (#10) of Raffles Institution goes for the layup against Darryl Lee (#13) of Hwa Chong Institution. Yeo led all scorers with 24 points and was crowned the Most Valuable Player of the game. (Photo 1 © Lim Yong Teck/Red Sports)

Receiving Most Valuable Player (MVP) honours was Justin Yeo (RI #10), who led all scorers with 24 points, while teammate Vignesh Rengarajan (RI #11) finished the game with 18 points.

RI never trailed and held on to a double-digit lead from the third quarter onwards. HCI tried to keep the game close but they were unable to find much success, going cold from the field in the third quarter. RI took advantage of their plight and eventually closed out the victory.

RI caught HCI by surprise when they started the game with a full court defensive press, causing HCI to commit three consecutive turnovers as RI raced to an 8–0 run.

HCI had no chance against RI’s defence and resorted to drawing fouls to get to the free throw line. Justin Yeo (RI #10) and Vignesh Rengarajan (RI #11) combined for 16 of the 23 points made by the entire team in the first quarter. RI finished the first quarter with a 23–15 lead.

HCI continued their scoring drought in the third period and found themselves in a desperate situation as they were down 14 points midway through the quarter. By then, RI were already firmly in control with Justin Yeo (RI #10) and Vignesh Rengarajan (RI #11) scoring at will at one point of the game. RI were leading by as much as 17 points with four minutes left in the third period.

HCI picked up their slack, feeding their center, Darryl Lee (HCI #13) in the paint for a couple of easy baskets and sending him to the free throw line. However, they were unable to trim their deficit as a determined RI team kept pounding at them play after play, showing no mercy.

The exclamation point came when Vignesh Rengarajan (RI #11) made a jumper just before the buzzer to give his team 20-point (58–38) lead.

However, RI experienced a momentary scare when Vignesh Rengarajan (RI #11) fouled out of the game midway through the fourth quarter.

Despite Vignesh’s (#11) absence, HCI were low on morale in the final quarter. Sporadic offense came from Toh Tze Cong (HCI #8) and Yap Teng Suan (HCI #9) but RI erased their comeback attempt with a concerted team effort. RI never give HCI any chance of making a significant run in the late as they closed out the victory, putting an end to their nine-year winning streak.

Jovi Lim (RI #14) said, “We managed to make it here and we did not want to waste our chance. I would like to thank my coach for his effort during our training, the support from the crowd, as well as our teacher-in-charge. Even though we had our share of ups and downs throughout the season, I am happy that we managed to close out this game.”