A Div Floorball: RI retain title with 4–2 win over VJC 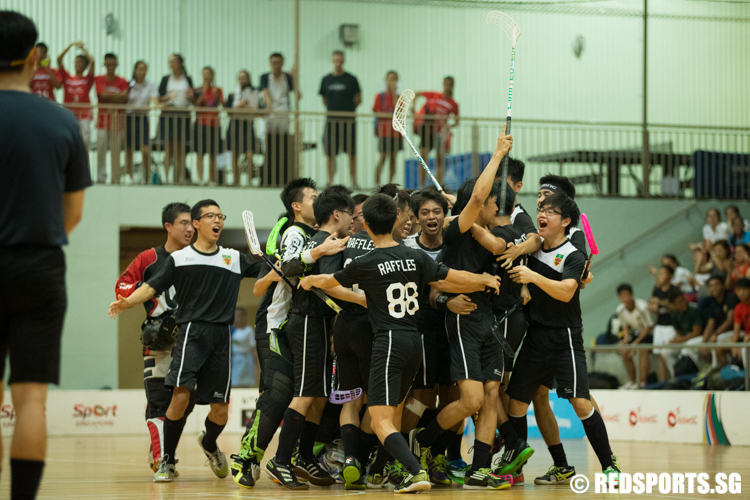 For VJC, this is their first appearance in the final since 2013. They finished fourth last year.

The two teams had met earlier during the group stage where they drew 1–1. To get to the final, VJC had beaten Anglo-Chinese Junior College (ACJC) 2–0 in one semi-final while RI saw off Meridian Junior College (MJC) 2–1.

The game started off with a fast pace as both teams alternated possession and were trying shots one after another. RI drew first blood in a highly physical game, with Foo Jun Wei (#17) smashing the opener in halfway into the first period.

RI rode on their momentum to score another through Zong Wei (#88) with a wrap around goal to extend their lead to 2–0. With two minutes left, Muhammad Amirul Afiq (#45) scored a goal with his proficient stickwork to give RI a 3–0 lead heading into the second period.

In the second period, RI had more possession but a defensive VJC prevented them from finding the back of the net. Josiah (#3) of VJC managed to break through RI’s defence to score the first goal for his team with four minutes left to reduce the deficit to 1–3.

With three minutes left in regulation time, Zong Wei (#88) of RI scored a long range goal to make it 4–2 and send the RI crowd into raptures. However, VJC never gave up and managed to score a last goal through Josiah (#3) but RI’s victory was assured.

RI captain, Amirul (#45), said, “We came into the game with no expectations but high confidence in ourselves. It was an uncertain game for us with a 50-50 chance and we took our chances.”

On the season, Amirul added, “It was a season full of ups and downs but we just kept on going according to our plan. I would like to thank the supporters, teammates who trusted me, coaches and teachers.”

Zong Wei (RI #88) added, “I think our team performed very well in today’s game, where we managed to score early and stay composed to play our own game. We were really hungry for goal at the start and thus managed to score three.”

VJC captain, Luqmanul Haziq (#4), said, “It was a hard fought game and we have to admit that they were the better team in today’s game. At the same time, I’m very proud of my team, we worked very hard and we have no regrets. It was a meaningful season for us, where it helped everybody in our team grow, as a team, with each other, to learn from another. I’m very grateful for this team.”