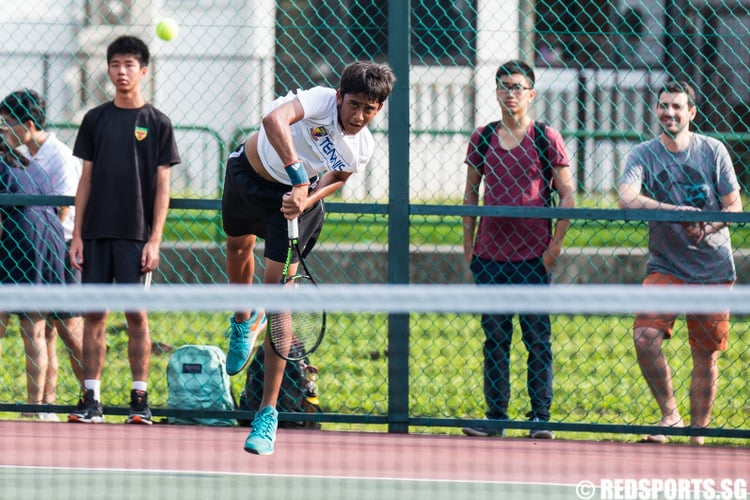 Defending champions Raffles Institution (RI) went down to ACJC in the semi-final, but came back to beat St. Andrews Junior College (SAJC) 5–0 to earn themselves the third placing.

While ACS(I) have reached the finals every year since the inception of their International Baccalaureate (IB) programme in 2006, their only previous title came in 2007.

The victory also means ACS(I) has achieved a grand slam of A, B, and C Division National Schools Tennis Championship titles.

The competition was stiff with ACJC biting on the heels of ACS(I) and both sides putting up a tremendous fight for victory.

Nevertheless, the ACJC singles players put up a strong fight.

The fourth match to complete was between ACS(I)’s Imran Mooraj and ACJC’s Giritharan Devendiran. Imran had to retire with a leg cramp and Girtharan won the match 7–5, 4–1.

With the overall score tied at 2–2, the final ongoing match between ACS(I)’s Raahil Doshi and ACJC’s Timothy Ong became the decider.

With Raahil from ACS(I) up by a set, an intense fight for points ensued in the second set.

At 3–3 in the second set, the Raahil’s right leg began to cramp but he refused to give up and continued the match. Raahil went 4–3 ahead with a break of service when Timothy Ong double faulted.

The remaining games took an emotionally-charged turn with a score dispute. ACJC then tied up the score at 4–4–4.

While Timothy of ACJC attempted to convert the rallies into game points, it was to no avail, with ACS(I)’s Raahil eventually taking the match with a 7–6 (7–5), 6–4 win after a two and a half hour-long match.

Raahil said, “The pressure was there but I just stayed in the game and I’m just doing it for the school.”

With regard to the ACJC team’s performance, ACJC vice-captain Evan Tan commented, “We performed very well and worked really hard. I think many didn’t expect us to come this far but we made it. We played really well and there is no need to be disappointed.”