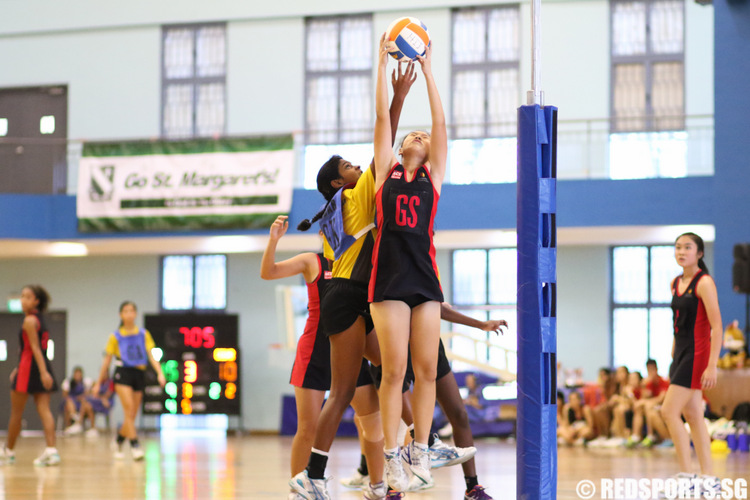 SSP’s Goal Shooter, Sherlyn Yip, opened the scoring for her team as her good shooting allowed her team to race off to an early 4–0 scoring run. However, Averyl (GS) of Cedar Girls’ soon responded with a goal of her own. A successful penalty shot by Yowkebed (GA) of Cedar Girls’ reduced the deficit to 2–4. Averyl scored again when she rebounded her own miss to make it 3–4, with just 5 minutes left on the clock.

Both Rishika Ghanamoorthy (WD) and Cheyenne Rae Howard (GD) of SSP worked hard to prevent passes into their defensive arc, making several interceptions in the centre-third that were converted into goals by their shooters. Sports School went on to score five unanswered goals towards the end of the quarter to pull away 9–4 going into the first timeout.

The second quarter saw Cedar Girls’ struggling to advance the ball into the final third, due to diligent defending by the Sports School players. However, the Cedar players managed to score on several defensive rebounds through Keziah (GK) and Deebika (GD). Cedar and SSP scored one after another, adding four points apiece in this quarter with SSP leading 13–8 by half-time.

Both teams continued to trade points as the third quarter commenced, playing with a high rate of turnovers. Cedar Girls’ fluidity in their offence eventually helped them to outscore Sports School 6–5 in the third quarter to trail by four (14–18) heading into the final timeout.

The final quarter saw Cedar Girls’ fighting hard for ball possession and pressuring Sports School in the centre third. At one point in the final quarter, Cedar Girls’ scored three consecutive points through successful penalty goals converted by their shooters. Cedar Girls’ trailed by two (18–20) with just five minutes on the clock to go, but Sports School eventually bounced back to pull away. SSP’s strong first quarter effort helped them to the eventual 23–18 victory.

Sport’s School captain, Germaine Au, said, “We played well today and left nothing behind. Cedar Girls’ gave us a tough fight and they came out fighting in every quarter. They did their best too and it was a good performance from both teams!”