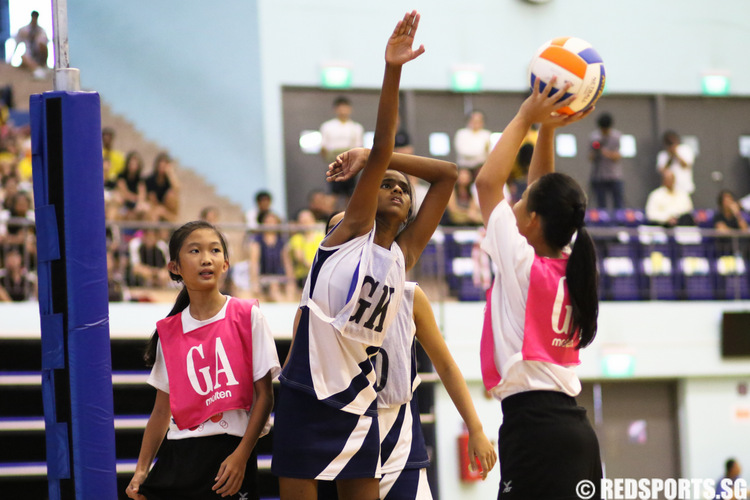 (WA) of CHIJ Toa Payoh reaches out in an attempt to block the shot. (Photo 1 © Clara Yuan/Red Sports)

CHIJ TP started the game in control, and had the lead throughout the game. They sped off to a 6-0 lead right at the start of the first quarter, only to have Dunman fight back to bring the score to 6-2 by the end of the first quarter. That was how it was for most parts of the game, with CHIJ attempting to stretch the lead and Dunman fighting back to keep the defending champions within striking distance.

Dunman’s first goal of the game came only in the last minute of the quarter, through a successful conversion by Jia Hwee (GS).

Dunman were allowed opportunities to bring the ball down the other end but not without pressure from their longer-limbed opponents. The smaller Dunman shooters had to work extra hard to get around the taller CHIJ defenders and could not find the right spaces to meet the ball in the goal circle. CHIJ’s Goal Defence, Tina Leong, held the fort in the goal circle and created many turnovers for her team to attempt more shots.

CHIJ extended their domination by executing their chances well with their long lobs and accurate passes, pulling ahead to lead 15–5 by half time.

In the third quarter, CHIJ’s good team chemistry coupled with aggressive defence outscored Dunman 12–3, allowing them to extend their lead to 27–8. Despite several misses at the net by their shooters, the powerful rebounding displayed by Eda Yasmin (GS) and Liu Ye Wei (GA) paid off.

Worthy of mention were Nurul (GK) and Insyirah (GD) of Dunman, who displayed commendable efforts in their attempts to challenge every lob from the CHIJ shooters who were bigger and taller than them. With well-timed jumps, both girls managed to tap a few lobs towards the end of the quarter and create several turnovers for their team.

Refusing to let their smaller statures be a disadvantage, Dunman tried their hardest to defend against their opponent in the fourth quarter. Dunman managed to intercept the ball in the center-third on a number of occasions which allowed them to pot in three unanswered goals at one point through Wei Ping (GA).

The Dunman players came out fighting in the final period and quickly and matched their opponents goal for goal at 7-7. Despite Dunman’s comeback in the final quarter, they could not overcome CHIJ’s 19-goal lead from the third quarter and eventually went down 15–34 to CHIJ.

Dunman’s captain, Cynthia, said, “We fought hard today. Although we lost the match today, we’ve come really far together as a team.”

“The CHIJ players were really fast and aggressive. They managed to intercept our passes and bring down the ball quickly.” said vice-captain Insyirah.

Captain of CHIJ Toa Payoh, Claudia Yip, said, “I’m very proud of my team for performing well every quarter. We listened to our coach and performed as what we were told.”