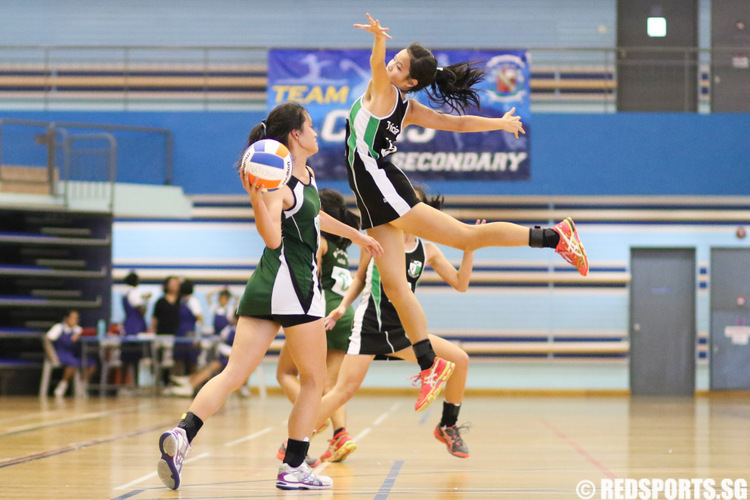 Tricia of RGS jumps in an attempt to block the pass. (Photo 1 © Clara Yuan/Red Sports)

Both teams met previously in the second round, where St. Margaret’s emerged 25–22 winners. With both teams under the same coach (Chng Li Li), the match was a fairly close affair with a bronze medal at stake. RGS were ranked third last year.

St. Margaret’s trailed throughout the whole game, only to snatch the lead in the final few minutes of the last quarter and run away with the victory.

The first few minutes of the opening quarter saw both teams fumble with the ball. RGS settled down quickly and played to their game plan, with Tricia Koh (GS) scoring the first goal for her team. A successful penalty shot taken by Sara Stone (GA) of St. Margaret’s tied the score at 1–1. Despite a slow start blighted by turnovers, RGS managed to hustle for the two-point (5–3) lead in the first quarter through several offensive rebounds and second-chance opportunities by their shooters.

The captains of both teams, Jane Yu (GK) of St. Margaret’s and Angelina Lim (GD) of RGS, were in red-hot form in the second quarter. Both players kept the opposition’s offence at bay with several timely interceptions and adept defensive positioning. RGS extended their lead within the first few minutes of the start but St. Margaret’s narrowed the margin by converting successive RGS turnovers.

Chloe Koo (GS) of St. Margaret’s converted the penalty for her team to draw level at 6–6. Both teams then proceeded to trade the next five points in a thrilling first half. St. Margaret’s ended the first quarter slightly behind RGS at 8–9.

Both teams took care of their respective center passes in the third quarter up until the sixth minute when a turnover by RGS saw St. Margaret’s trail by three (13–16) at one point. However, RGS’s lead was short-lived as St. Margaret’s bounced back to even the score. RGS eventually outscored St. Margaret’s 9–8 to lead 18–16 heading into the final quarter.

There was nothing to separate both teams in the fourth quarter as they traded points with each possession in a desperate attempt to gain the advantage. The equaliser (20–20) came four minutes into the quarter, when St. Margaret’s teamwork and accurate Goal Shooter, Chloe Koo, carried out a successful conversion. They then continued to extend their lead to 23–20 as Chloe executed her shots with confidence to storm ahead.

RGS are never a team to go down without a fight and they desperately tried to reduce the deficit in the last few minutes of the game. Valerie Shao (GA) of RGS responded with two consecutive goals, taking the score to 22–23 with just two minutes on the clock to go.

With 40 seconds to go, St. Margaret’s were in possession of the centre pass. A crucial interception made by Miki Ng (GK) of RGS in the goal-third brought the crowd to the edge of their seats, as RGS pushed for overtime. However, their final desperation shot at the buzzer missed its mark which left St. Margaret’s to seal the game 24–23 winners.

Captain of St. Margaret’s, Jane Yu, said, “I’m very proud of my team. We came back fighting in the final quarter and gave our all. Raffles played really well today too! They were consistent and put up a good game every match.”

St. Margaret’s vice-captain, Claris Goh, was elated at their victory. “We fired up in the last quarter. We showed what we were capable of! I’m very happy and I love my team.”