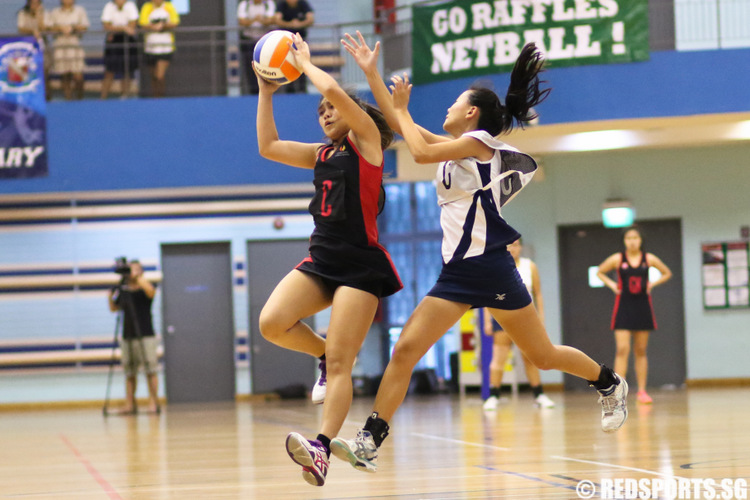 Both teams met previously in the second round of this year’s Nationals, where CHIJ emerged 40–18 winners.

CHIJ took the lead within the first few minutes of the start, with Tan Yin Yun displaying her shooting threat with a 6–2 scoring run. Sports School eventually narrowed the margin with several turnovers in the centre-third to head into the first timeout slightly behind CHIJ at 4–6.

CHIJ would advance the ball up the court with lightning-quick efficiency, while the Sports School players were tenacious in challenging every pass. Both teams exchanged goals early in the second quarter, matching each other point for point. CHIJ rode on their strong first quarter effort to carry the slim 11-8 lead going into the half-time interval.

The high-tempo, fast-paced game looked to be swinging in favour of CHIJ, but Sport’s School Goal Keeper and Goal Defence managed to hold off CHIJ’s key shooter Tan Yin Yun (GS) in the third quarter as they manage to intercept the ball on several occasions with well-timed jumps.

On the other hand, CHIJ also enjoyed several turnovers made by Alena Rae Ong (GD) and Edna Leong (GK), who displayed powerful rebounding and relentless pressure on the SSP shooters.

A series of quick SSP turnovers allowed CHIJ to take a 19–14 lead to end the third quarter.

CHIJ never looked back from then on. They continued with their momentum and set themselves up for more interceptions, and gradually established a 10-point lead (25–15) in the fourth quarter. On offence, CHIJ maintained their tactics, lobbing the ball to Goal Shooter Tan Yin Yun for several easy goals.

The CHIJ midfielders Nur Dahlia (WA), Rui Rong (C) together with Rindy Lok (GA), displayed patience and composure in bringing down the ball to their shooter. Yin Yun contributed to all 12 goals scored in this quarter, most of which were on first attempts. The SSP players retaliated with commendable team effort in pressuring CHIJ’s offence in the centre third.

SSP made a valiant attempt to reduce the deficit in the final few minutes of the match but were let down by their shooting. It was CHIJ that held on to their momentum to seal the game 31–16 winners.

At the final whistle, the CHIJ supporters erupted into cheers as their players were visibly elated with the wins.

Tan Yin Yun, GS of CHIJ, said, “I was feeling rather nervous at the start. But the more we went into the game, the more composed I felt in taking my shots.”

When asked what went through her mind when she was double-teamed by the Sports School defenders, she said, “I told myself that I just need to stand strong and grab the ball in.”

Sports’s School captain, Tan Zay Hua, said, “We played our best today and tried to chase back the score. The CHIJ players put up a really strong fight and played well in every quarter. Congratulations to them!”