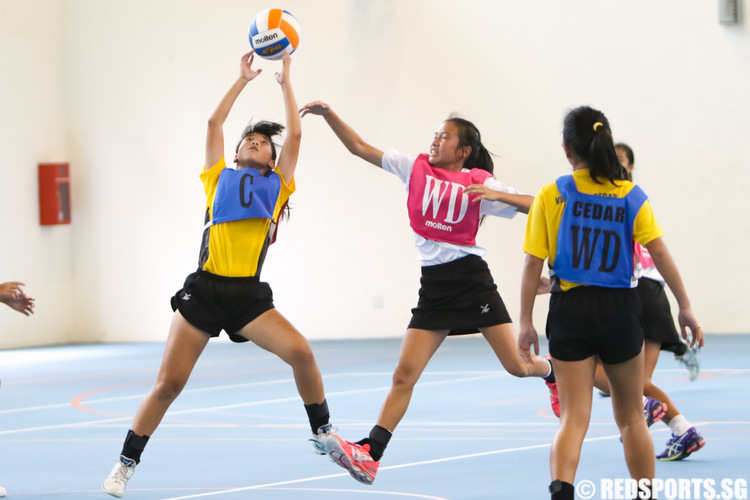 The first quarter saw both teams maintaining their centre-pass possession and taking turns to score in the first few minutes. However, the Dunman players held on to their momentum and took the early advantage with good ball movement around the court to grab the 9–6 lead going into the first timeout.

A series of unforced errors followed both teams in the second quarter, where players were penalised for their stepping and reposession mistakes. A successful shot carried out by Averyl (GS) of Cedar Girls’ in the last few seconds of the game saw their team tie the quarter at five apiece to end the half. Dunman led 14–11 at half time.

The third quarter was a low-scoring affair which saw both teams turnover the ball regularly. The Dunman players showed good on-court support, especially Wei Ping (GA) who created many scoring opportunities for her shooter with her good runs and quick thinking. Cedar Girls’ tightened defence in the goal circle also helped ensure a closer contest in the third quarter at 4–3.

Going into the third and final break, Dunman held a larger lead at 18–14.

The final quarter saw smooth delivery of passes from both teams and players fighting hard to gain possession of the ball. Nadrah (GK) from Cedar Girls’ took advantage of her height to nab high balls over the Dunman shooters, converting several rebounds into turnovers for her team to score points.

Dunman’s GS, Chermine, opened the scoring for her team and her good shooting allowed her team to race off to a 4–1 scoring run. Cedar Girls’ made a valiant attempt to reduce the deficit in the final few minutes of the match but Dunman held their ground to seal the game 25–20 winners.

With the victory, Dunman will now face defending champions CHIJ Secondary (Toa Payoh) on Tuesday, April 21 at 2.35 p.m. Cedar Girls’ will play against Singapore Sports School in the 3rd/4th placing match at 12.10 p.m. Both games will take place at Jurong East Sports Hall.