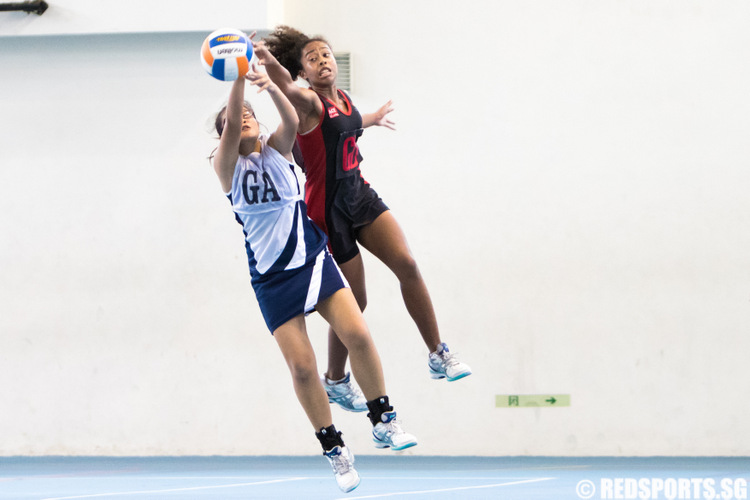 CHIJ TP started strongly to give themselves a 8–3 lead after the opening quarter.

Singapore Sports School played their trademark aggressive game of fast, swift passes but CHIJ were not intimidated and did not allow their opponents to pull ahead too far. The energy of the game increased greatly in the second quarter with many contact and obstruction fouls called.

CHIJ and SSP scored one after another, adding six points apiece in this quarter with CHIJ leading 14–9 by half-time.

Sports School closed the deficit to only two points (12–14) at the start of the third quarter by scoring three unanswered goals, all through successful penalty shots converted by Germaine Au (GS) and Nicole Shin (GA).

However, CHIJ eventually bounced back and managed to garner three points through Liu Ye Wei (GA). Determined to narrow the deficit, the SSP players fought hard to gain possession of the ball. Through several rebounds and CHIJ turnovers, Sports School were able to score four consecutive goals to trail by one (16–17) with 3 minutes to go on the clock.

Eda Yasmin (GS) score three successful penalty goals towards the end to give CHIJ a 19–16 lead at the end of the third quarter.

Commendable efforts by Rishika Ghanamoorthy (GD) of Sports School to intercept the ball in the centre-third paid off as the equalizer (21–21) came five minutes into the game. However, SSP’s momentum was shortlived as CHIJ went on a 4–1 scoring run towards the end of the final quarter which helped them to the eventual 27–25 victory.

Defending champions CHIJ are looking hungry to retain their title against Dunman Secondary in the final on Tuesday, April 21 at 2.35 p.m.