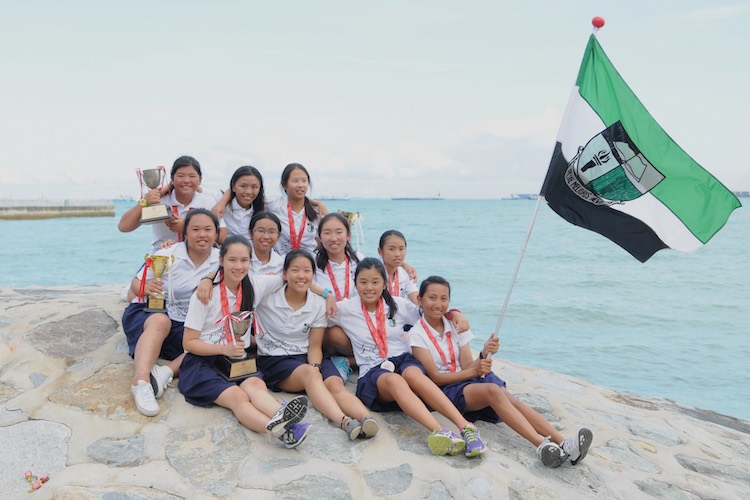 Last year, RGS lost out to TKGS and NYGH in the B and C Divisions respectively.

The Rafflesian trio of Samantha Yom, Jasmine Low, and Phua Shyn Ee finished first, second and third in the B Division Byte fleet, and scored a total of six team points to help RGS qualify for the B Division title.

Tan Li Tong, Tanya Koh, and Rebecca Ling were the top performers of NYGH, and finished in fourth, seventh, and 14th respectively. They garnered 25 team points, which was enough to clinch the silver. TKGS had to settle for the bronze with 33 team points, contributed by Cheryl Teo, Evangeline Tan, and Aqylla Jumali, who finished 10th, 11th, and 12th in the fleet.

RGS’s sailing captain Jasmine Low said, “Being conservative was the most important factor. I was able to start well for most of the races and cover my opponents. As the wind conditions were tricky and unstable, I had to play the shifts and look out for pressures.”

She also praised her coach and teacher for aiding the team in their pursuit of the B Division girls’ title. “Coach Liu Hong and Ms Chrislin Lee gave their ultimate support and guidance throughout the entire training and racing periods, providing us with valuable information to learn and grow as a sailor. Constant encouragement and support from our coach and teacher enabled us to work well together as our team and sail our best.”

The maximum number of races in the championship was reduced from seven to five. When asked about the adequacy of sailing just five races, Youth Olympic gold medalist Samantha Yom commented, “More races would definitely be better to show a sailor’s consistency and skill.”

Even though each school may send up to 10 sailors, only the top three sailors will contribute points to the school’s team points. A low-point scoring system is utilised, and the fewer team points a school garners, the better their position.

The sailors competed in the Byte class on the Charlie course, which was on the waters off the PA East Coast Sea Sports Club. The sailors raced for two days, and enjoyed sunny weather and good winds ranging from six to 12 knots. However, in the late afternoon of the first day, there was a passing rain cloud which temporarily put racing on a pause. A strong downwind current added in an extra tactical element, and played a significant factor in the upwind legs.

The sailors managed to complete five races during the course of the regatta. Upon completing five races, they are allowed to discard their worst race, and only their best four races will be considered.