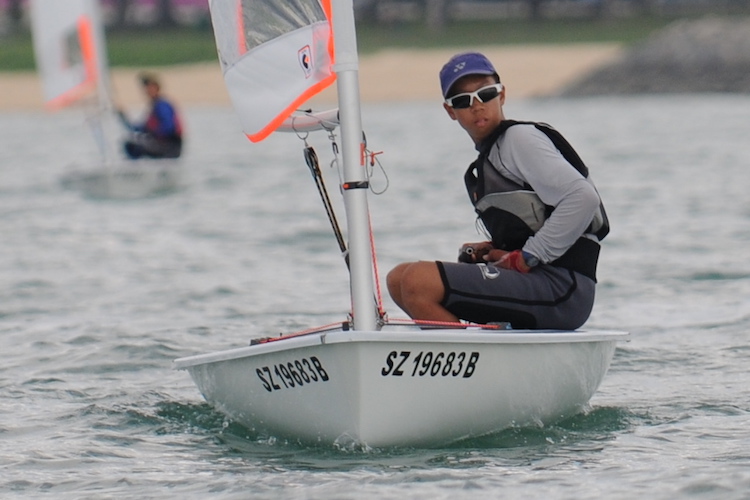 In the C Division category, sailors are required to represent their school in the Byte and Optimist classes. Only the top three sailors in their respective classes will contribute to the team points. A high-point scoring system is adopted for determining the team points.

Daniel Ian Toh from RI won the Optimist class with seven points, and contributed 19 team points. When asked about the factors which led RI to success, Daniel commented, “We had good teamwork, encouraged and spurred each other on, and had a strong desire to win. Also, We have a very dedicated coach (Coach Hu) and a supportive teacher (Mr. Alvin Chong) who were always on water to encourage us. I am very elated that RI reclaimed the C Division boys’ title this year.”

RI also had the top sailor in the Byte class. Koh Yi Nian won four out of five races, and finished with four points, and contributed 34 team points.

He said, “I think it is important to play the course well and reduce unnecessary risks. The north-easterly wind shifts were really hard to predict, so I made sure I stayed in the middle of the course to maximise my options in playing the wind shifts. Additionally, the starting line played a big factor too. I tried to start at the biased end in every race and made sure that I am able to hold my lane.”

He also attributed the team’s success to the help from RI’s seniors.

“My seniors are the ones who helped me the most during the regatta. They made sure that all my equipment were alright, reducing the risk of gear failure on the sea. They also gave me strong words of encouragement and support throughout the entire course of the regatta. For that, I’m really grateful to my seniors.”

The Byte sailors competed on the Charlie course, on waters off the PA East Coast Sea Sports Club, while the Optimist sailors were on the Bravo course, which was right in front of National Sailing Centre’s shoreline.

The sailors raced in fine weather, with only the threat of a brewing storm in the late afternoon on Wednesday. During the two days, there were moderate five to nine knot breezes, with a strong downwind current which made sailing upwind challenging, and added an additional tactical element in the upwind legs.

They managed to complete five races in these weather conditions, with the allowance to discard one race. Hence, only their best four out of five races was counted.