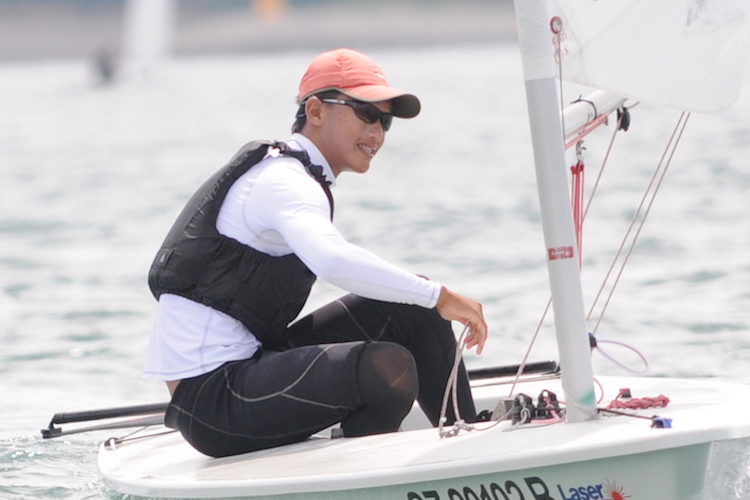 National Sailing Centre, Tuesday-Wednesday, April 7-8, 2015 — For the fifth consecutive year, Raffles Institution’s (RI) team dominated the A Division once again with a commanding presence in the fleet at the National Schools Sailing Championships.

Of the top 10 performers, eight of them were from RI. The Rafflesians also managed to clinch all three podium positions. Their top three performers, Justin Chew, Loh Jia Yi, and Reynard Lee, finished first, second, and third respectively. They accumulated six team points, which is the minimum possible.

Elliot Chong, RI’s A Division captain, said, “Our sailors really love the sport and are dedicated to it. Most of us started sailing in primary school, and have been sailing ever since. Also, many of us train up to five times a week, and have gone abroad to represent Singapore in major competitions. We have literally given our lives to this sport, and are driven on by our passion and desire to continually outdo ourselves.”

They did not let obstacles dampen their spirits or hinder their pursuit for the gold. Elliot added, “For the first time ever, due to a budget cut, we were unable to purchase the necessary equipment to refurbish our boats. As such, we were forced to salvage spare parts from scrap heaps.”

The sailors were competing in the Alpha course, on the waters off National Sailing Centre and National Service Resort and Country Club, with tricky weather conditions.

Across the two days, the sailors were dealt with moderate winds ranging from five to 10 knots, and a punishing strong downwind current, which made sailing upwind much more demanding. The sailors also had to take into account the downdraft from the airplanes flying over the race course, which produced frequent yet random gusts and wind shifts.

In the A Division boys’ category, the sailors had to sail their races on the Laser Standard, which is an Olympic class boat with a sail size of 7.06 square metres.

They managed to complete five races in these weather conditions, with the allowance to discard one race. Hence, only their best four out of five races will be counted.

The finishing positions of the top three sailors of each school will contribute to the team points. In this category, a low point scoring system is utilized; the first boat gets one point, the second boat gets two points, and so on. This meant that, the fewer the total team points, the better.