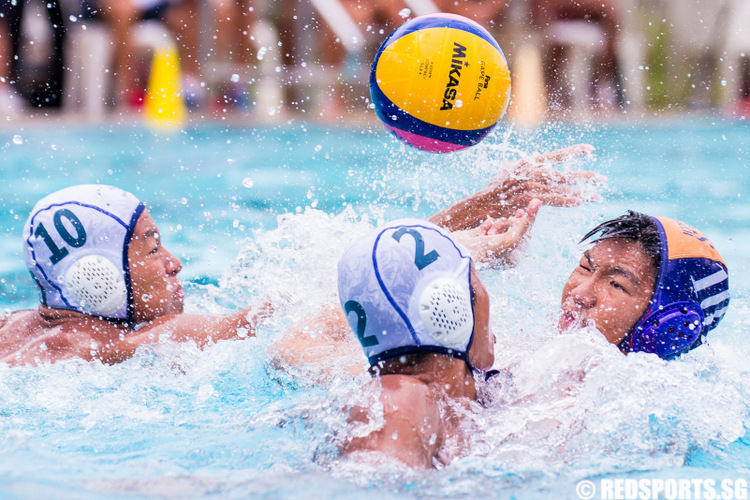 PESEB, Tuesday, March 24, 2015 — Strong defensive play by Anglo-Chinese School (Barker Road) propelled them to a 7–3 victory over Hwa Chong Institution (HCI) in the final of the National B Division Water Polo Championship, earning them their first title since 2009.

ACS captain Yu Jun Jie (#10), who finished the game with a hat-trick, said, “To win this, it’s amazing. Especially after five years of waiting.”

“We tried our best and it’s all that matters,” said HCI captain Bryan Ng (#1). “They (ACS) were hungry for it and played harder for it. It was not easy for us because our pool was under construction, thus we trained all over the place. Our training times were staggered and we didn’t always train together. But I’m still proud of what we achieved.”

Both teams met in the preliminaries, where HCI claimed a 5–4 victory. Both ACS (Barker Road) and HCI also beat defending champions Anglo-Chinese School (Independent) 13–6 and 6–5 respectively to end the latter’s season prematurely.

Before the game, both teams shared a moment of silence in tribute to the late founding prime minister of Singapore, Mr Lee Kuan Yew, who passed on a day before.

ACS were quick to attack in the opening quarter, and a long pass from custodian Daniel Ng (#1) beat the defence for the easy Sean Tan (#5) goal.

HCI, however, were undaunted and maintained their defensive pressure on ACS to force turnovers. With 35 seconds remaining, Chester Ng (#9) took advantage of a fake pass to score an equalizer from beyond the 5m line.

Both teams went back and forth in the following quarter, but ACS had a slight upper hand as they kept the ball in HCI’s half for the bulk of the period. Ng (#1) highlighted the quarter with his goalkeeping, as the ACS goalkeeper denied four HCI attempts from close range.

HCI managed to hold their ground, but a momentary defensive lapse allowed Yu Jun Jie (#10) to score off a spectacular behind-the-back shot to give ACS the one-point lead.

HCI opened the third quarter with a goal by Ethan Leong (#11), tying the game at two apiece. However, ACS responded quickly with two goals by Bryan Cheng (#7) and Yu (#10), to increase their lead to two points.

ACS dominated the final quarter, outscoring HCI 3–1 in the frame. A penalty was awarded to ACS within seconds into the quarter, as HCI custodian Ng (#1) was called for pushing the ball underwater. Yu (#10) duly converted the penalty, which sparked a 3–0 run, capped off by a fast break by Daniel Ang (#11).

ACS custodian Ng (#1) was a crucial piece in ACS’s playbook as he continued his sterling play on defence, denying several HCI attempts with his quick reaction.

With a minute left in the quarter, a momentary defensive lapse allowed Ethan Leong (#11) to gain an easy goal for HCI. It was merely a consolation as ACS clinched the eventual victory.

ACS’s Ng (#1) said, “It was a tough fight today as Hwa Chong are a good team. Everyone played an important part in today’s victory, and I’m just doing my job as a keeper. Without Jun Jie (#10) and all the other scorers, it could not have been possible.”

“Today’s performance was awesome, especially the Secondary 4 players. A few of us like Benjamin, Adric, Ryan, Bryan Cheng, Daniel, Sean, all of us, we were together for four years, since Secondary 1. Some of us even before that,” said Yu (#10).

The 16-year-old added, “It’s definitely a fitting end to our journey. We won the C Division title when we were in Secondary 2 as well. So we started off winning, and we ended off winning. It is an amazing memory that I will forever remember.”