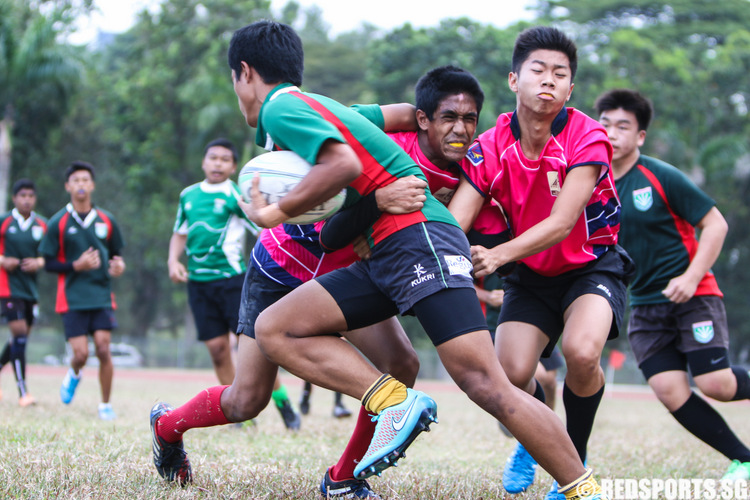 Greenridge played a strong offensive game right from kickoff, with Muhammad Irsyaduddin (#10) taking the lead during attacks as he was strong on runs in the whole first half and spun past his defenders time and time again. Irsyaduddin outran his defenders to touch down for the first try of the game (5–0).

Bukit Batok on the other hand, were unable to match Greenridge’s offensive speed and allowed them a 41–0 scoring run by halftime.

In the second half, Bukit Batok’s scoring chance came when Adriel Goh (#17) received a well-placed pass from his teammate. The path to the goalline was clear but the Greenridge defenders were quick to react, surrounding Adriel even before he made the run.

For Greenridge, every player on the field was a threat and this was difficult for Bukit Batok to defend. As such Greenridge continued scoring tries one after another to consistently add to the scoresheet.

Down 69–0, a momentarily lapse in Greenridge’s defence allowed Zachary Hua (BBSS #8) to score the first try for his team. Edward Philip (BBSS #5) converted to make it 7–69.

Greenridge captain, Jing Heng (#8), said, “It was a fun game for us and it was a rather interactive game for both teams. I think we still need to improve on our communication as we had a lot of dropped balls during the game. Our aim for this season is to get Bowl Champions as we were only runners-up last year.”

Bukit Batok captain, Adriel (#17), said, “It was our usual game. I’m glad that towards the end of the game we managed to put together a play to score the try. I think that within the team, we need to encourage one another more.”