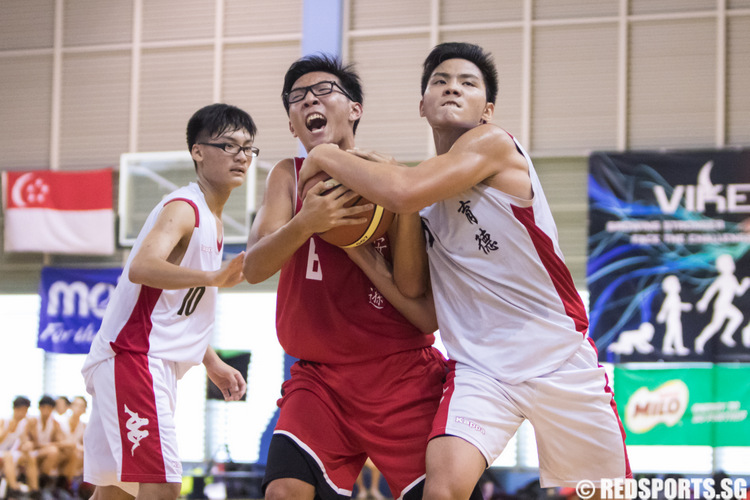 Singapore Basketball Centre, Friday, January 6, 2015 — Edgefield Secondary led throughout the game to defeat Anderson Secondary 55–40, claiming their first win in round two of the North Zone B Division Basketball Championship.

The game started with Edgefield taking the tipoff. Ashley Eng (Edgefield #10) scored the first points of the game by sinking a three pointer. Edgefield led 11–4 at the end of the first quarter.

In similar fashion, Edgefield started the second quarter with a three pointer by Chong Jia Yang (Edgefield #8). On the ensuing possession, Jonathan Teo (Anderson #10) cut through two defenders and drove in for the basket. Both teams started to play tighter defense, giving their opponents a tough time to score. The quarter ended with a buzzer beater by Ashley Eng (Edgefield #10), extending Edgefield’s lead to 21–10.

In the third quarter, Jonathan Teo (Anderson #10) did an inside-out crossover, shaking off two defenders while he went for the basket. Soh Yuan Xiang (Anderson #6) followed with an unstoppable individual fast break effort. Jonathan (Anderson #10) added another a fast break, sprinting past three defenders and finishing off with a finger roll. He also hit a jumper near the free throw line. Ashley Eng (Edgefield #10), Khoo Jun Jie (Anderson #8) and Alvin Soh (Edgefield #7) traded back-to-back three pointers, as both teams fought for the lead. Edgefield led 36–28 at the end of the third.

Anderson’s plays were more effective in the fourth quarter. Soh Yuan Xiang (Anderson #6) penetrated Edgefield’s defense and finished off with a reverse layup. Jonathan Teo (Anderson #10) made three successful fast break attempts, reducing the scoring gap, but Edgefield were able to hold on to a 15-point lead to claim the victory.

Edgefield’s captain, Alvin Soh (#7), said, “I feel that our defence was not as good as we expected to be, allowing many easy shots to be taken by our opponent. Our shots, be it three pointers or normal shots, were good and we should maintain the percentage until the end of the tournament. Our fast breaks could also be improved. I would say that Yi Han (#15) and Ashley (#10) played the best today.”

We were unable to get the complete roster for Edgefield Secondary. If you know the players, please let us know through the comments below.