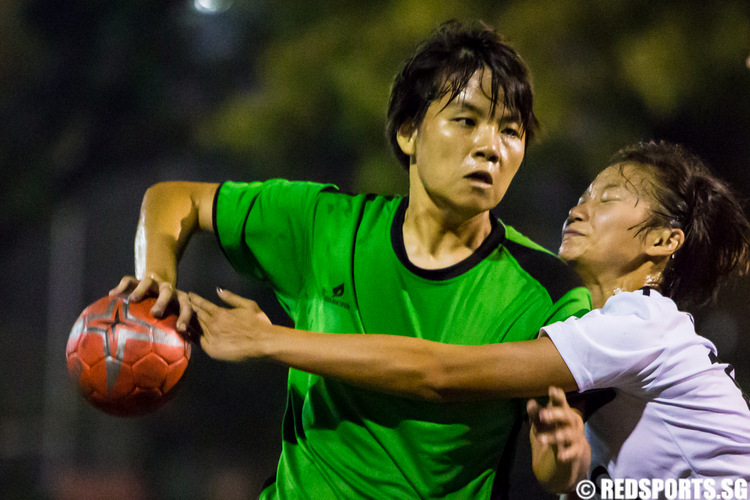 It was a highly commendable performance put up by both teams with their outstanding team chemistry and resilience throughout the match.

Both teams started off warily. Chen Xiao Juan (RH #5) found the breakthrough for her team, cutting into the gap of TH’s defence and scoring the first goal of the game. Ei Xue Han (#13) scored the first goal for TH with her sleek cut-in past her defenders.

The game was physically intense. Low Yuling (RH #13) drew an early yellow card minutes into the game. Soon after, Jassy Teo (RH #1) was awarded the first two minute penalty of the game. Taking advantage of the situation, Bee Leng (TH #9) displayed her shooting threat with her successive 9m attempts and scored two goals for her team.

A successful penalty shot by Marie-Theres (#18) gave RH a 5–4 lead at half time.

In an effort to interrupt TH’s shooting momentum, RH went on to challenge their opponents by going for the contact and clamping their opponents down. This proved effective for them as many blocked shots were made in the second half.

A wing shot at the far pole by Xiao Juan (RH #5) extended RH’s lead to 8–5 just before a timeout was called.

After the timeout, TH stepped up their defense and were determined to come back from the three-point deficit. Their drives were much more effective and the team’s morale was boosted after RH’s shooting threat Marie-Theres (#18) was awarded a two-minute penalty.

TH took advantage to tie the game at eight apiece with three consecutive goals – a penalty shot by Bee Leng (#9) and two successful cut-ins by Xue Han (#13). TH’s goalkeeper Ho Min Pei (#21) also made many good saves to prevent RH from adding onto the scoreboard.

RH continued to give their opponents strong fight and tried their best to upset TH’s flow and composure. However, TH went on to score three consecutive goals by Xue Han (#13) and Bee Leng (#9) in quick succession.

The game ended off with a penalty shot by Bee Leng (TH #9), who converted it to clinch the championship title before the final whistle.