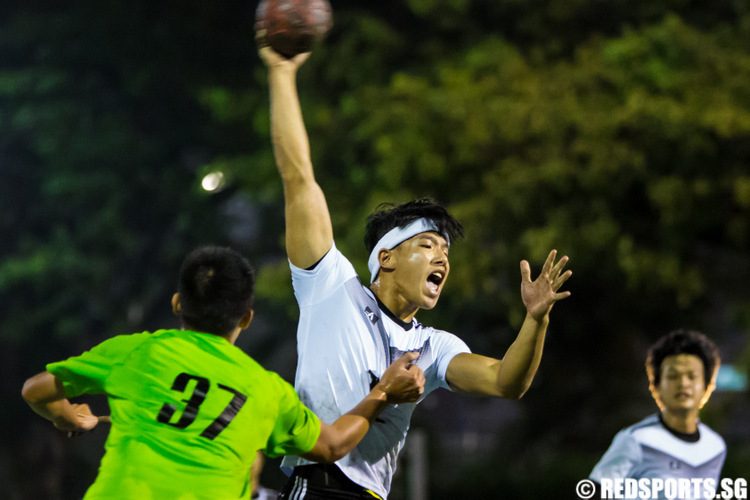 Ervin Sethi (TH #10) was the hero in overtime as his successful 9m shots broke the deadlock, giving Temasek the crucial lead with just a few minutes left on the clock.

Both teams started the match cautiously and settled down early in the game. RH put on a more dominant display as they managed to hold on to their lead from the first half.

Top scorer Mervin Hui (RH #8) was red hot in the first half, scoring three consecutive goals to fuel his team’s fast start just before the first timeout was called. TH scored their opening goal with a sleek cut in by Eugene Foo (TH #11).

After half time, TH stepped up their defense and were determined to come back from the two-point deficit. RH, however, did not back down on their attacks and continued to pull off their wing and pivot shots.

TH also faced much difficulty getting past an in-form Abhigyan (RH #21) and Arjun (RH #1) in front of the RH goal. Both keepers made fantastic saves, blocking off powerful shots from the outfielders. Terence Phua (TH #14) was rock solid at the back, stopping multiple shots at goal as well. His quick reflexes blocked off many shots from the RH onfielders which resulted in several fastbreaks for his team.

With just a few minutes left on the clock, RH managed to draw a penalty shot which was taken by Mervin Hui (RH #8). The Raffles bench erupted into cheers, as he managed to successfully convert the penalty to give his team the crucial one point lead. However, the crowd silenced after the referees overruled the goal.

The final stages of the game had everyone on their edge of their seats, as earlier fouls committed in the first half came back to haunt the players in extra time. Two-minute penalties were given in quick succession as both teams upped the pace in the dying minutes.

After matching each other point for point with five minutes to go on the clock, a powerful 9m shot by Jun Wen (RH #37) helped to put his team 20-19 up. However, Li Yang (RH #78) suffered a two-minute penalty soon after and RH had to play with one man down, giving TH a chance to narrow the point deficit. Taking advantage of the situation, TH scored three successive shots through a wing shot by Wilmer Tay (#7) and two powerful 9m shots from Ervin Sethi (#10).

At the final whistle, the Temasek bench erupted in joy, seemingly unable to fathom the comeback they just made as they emerged 24–22 winners over Raffles.

TH captain, Terence Phua (#14) commented, “I’m very proud of my team’s determination and morale to keep going even though we were chasing point by point.”

“Our defeat from last year really spurred us on, and I’m very thankful that our efforts have paid off,” he added.

RH captain, Koh Kai Ming (#25), said, “I thought that it was our best performance since the start of IHG. We didn’t hold back. We gave it our all and fought till the final whistle.”

He added, “Temasek put up a really good fight. They didn’t make it to the finals last year so it was truly a job well done. Congratulations to them!”