By Ian Chew and Delphine Goh 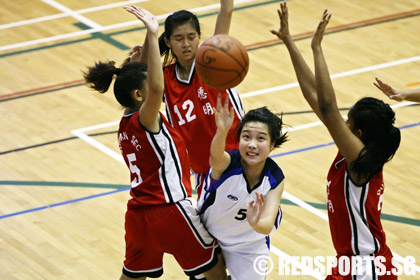 Tan Jia Qi (Nanyang #5) manages to release a shot as she forces her way through the Dunman defense. She was the hero of the match as her shots at the end of the fourth quarter secured Nanyang’s lead to give them the title. (Photo 1 © Lai Jun Wei/Red Sports)

Yet their cause to regain the title they last won a decade ago seemed lost when they trailed by five points with less than three minutes to do. Dunman forward Nur Syafirah (#10) had rallied her team admirably to an 11-1 run starting midway through the third quarter to establish a 39-34 lead. It helped Dunman’s cause when Nanyang went through a barren spell during this period, missing on all their attempts from the field and committing many uncharacteristic turnovers.

However Nanyang did not give up but redoubled their efforts to overturn the deficit.

“I told the team to believe in themselves and keep trying,” said James Ong, Head of Nanyang’s physical education department. “The shot that she (Jia Qi) scored at the end displayed the heart of a team that believed they could accomplish it (win the game)!”

Dunman reduced the deficit in the second quarter and trailed by just two points at half-time as Nanyang led 24-22.

Dunman outscored Nanyang 12-10 in the third quarter to tie the game up at 34-34 to set the stage for the heart-stopping fourth quarter.

The distraught Dunman team can take heart from their strong performance in their run to the final. They had edged out perennial favourites Anglican High School 66-58 in an earlier semi-final in an equally exciting match.

Anglican High emerged third place in the championship with a 59-50 victory over Christ Church Secondary, who took fourth place.