National University of Singapore Sports and Recreation Complex, Tuesday, 11 January, 2011 – Ngee Ann Polytechnic (NP) suffered their first loss in the NUS Water Polo Challenge when they lost 4-11 to Masters, a team made up of alumni water polo players from various varsity institutes. In another game, the National University of Singapore (NUS) thrashed Nanyang Polytechnic (NYP) 27-2 in the group stage.

2010 runners-up NP started their game against Masters strongly, pressing their attacks. The younger side drew first blood through Thaddeus Tock (NP #9), who scored from 5m out. Seng Yew (Masters #7) answered for his team just a minute later, scoring from close range.

Keepers from both sides pulled off saves in the remaining of the quarter, helping to keep the score close but it was the experience of Masters which pulled them through to give them a 3-1 lead at the end of the quarter, with Seng Yew and Marcus (Masters #5) scoring one each.

Masters extended their lead to 4-1 with an extra-man goal from Max Tay (Masters #7) after NP’s Chuan Yu (NP #2) was fouled out, creating an advantageous 6-on-5 situation. NP pulled two back from Rahul (NP #4) and Chuan Yu, closing the gap to 3-4 with four minutes left in the quarter.

However, NP soon found themselves in foul trouble, allowing Masters to edge them with an extra man. Marcus found the back of the net after receiving a pass from Yao Xiang (Masters #8) from the corner, making it 5-3 to Masters at half time.

Masters closed out NP in the third quarter, taking control of the game with their possession of the ball. NP could only manage to get one goal from Joseph Tan (NP #11), while Gareth (Masters #9) and Edmund (Masters #3) got on the scoresheet. Seng Yew scored his second goal of the game, extending Masters’ lead to 8-4.

The final quarter saw no replies from NP as Masters cut them off, extending the score to 11-4 by full time. Top scorer from the 2010 competition Yao Xiang scored twice, including a penalty goal, while Marcus scored in a one-on-one situation from the 5m mark, with only Elijah Quek (NP #12) to block his shot.

“We’ll learn from our setback and come back stronger,” NP’s Rahul commented about his team’s loss. The loss placed them second in their group, setting up a semi-final clash with defending champions NUS while Masters will face Singapore Management University in their semi-final. Both games are scheduled to take place on Saturday, 15 January 2011.

Changes to the defending champions have been made, with their main challenge for this tournament is to incorporate the new year 1 players into the team.

“We’ve been training hard so with good teamwork, we should be able to retain the title,” remarked Kenneth Foo, captain of the NUS team. 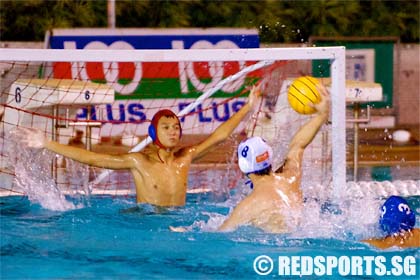 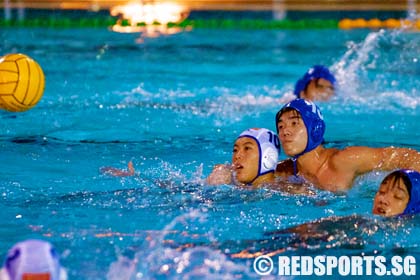 The NYP #13 finds himself tightly defended by the NUS #10 while he tries to retrieve a pass from his teammate. (Photo 3 © Xaveria Mo/Red Sports) 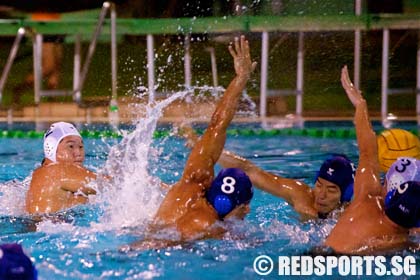 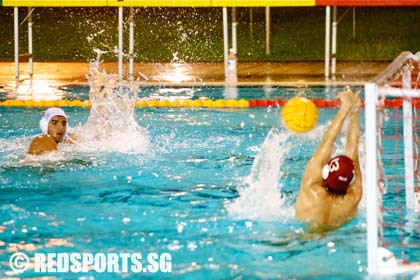 NP’s Rahul tries to put it into the back of the net but is denied by the Masters goalie. (Photo 5 © Xaveria Mo/Red Sports) 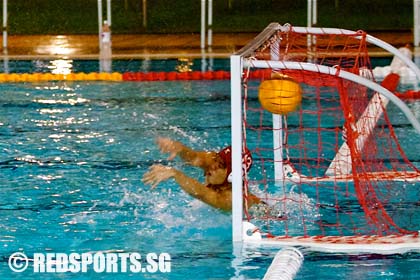 NP’s keeper could not reach for the ball in time as Masters chalked up yet another goal. (Photo 6 © Xaveria Mo/Red Sports) 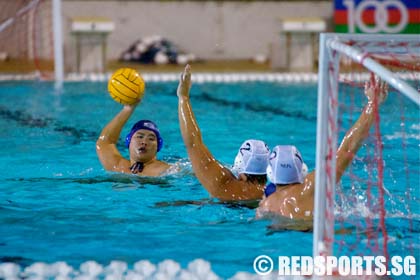 A Masters player tries for goal as NP’s defenders line up in front of him. (Photo 7 © Xaveria Mo/Red Sports) 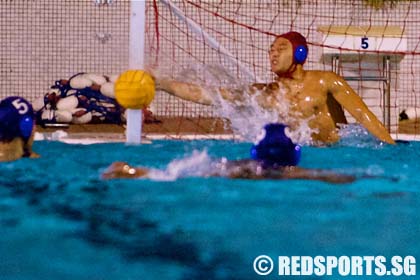 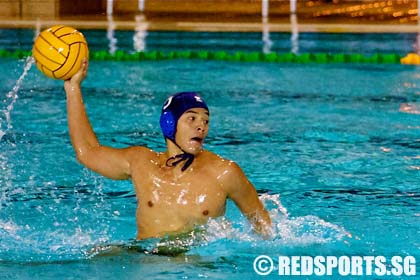