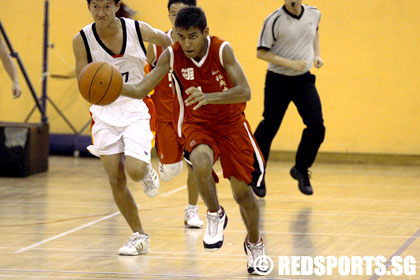 Jurong’s captain Danish Han was outstanding throughout the match and he led his side to the final with a game-high 26 points. (Photo 1 © Koh Yizhe/Red Sports)

Clementi Sports Hall, Thursday, March 4, 2010 – With 2.1 seconds on the clock and with the crowd on its feet, Lucas Lim (Jurong #10) showed nerves of steel to sink one of two free throws to seal a 69-68 win for Jurong Secondary against Hwa Chong Institution (HCI) in the semi-final of the West Zone B Division boys’ Basketball Championship.

Earlier, HCI missed three straight free throws with the scores tied 68-68. Raymond Loo (HCI #10), who scored seven of his nine points from the charity stripe, did well to get the hoop to level the scores at 68-68 with nine seconds remaining, but he missed the free throw.

Although a Jurong player got the rebound, Guo Leibing (HCI #4) stripped him of the ball and was quickly fouled, but nerves got the better of him as he missed both free throws to open the door for Lucas' heroics.

"Today, our performance was very good. Our defense was up to a higher level and everyone played well," said Jurong captain Danish Han, who scored a game-high 26 points including three 3-pointers to help his side overcome an early deficit.

There was nothing to separate the teams in the first three quarters. HCI took an early lead through two three-pointers from Guo Leibing, but Jurong soon caught up with a three-point play by Danish, which levelled the game, before Jia Cheng Lee (Jurong #11) gave his side their first lead of the game at 12-10.

Jurong would hold that lead, extending it to as many as eight points, until the fourth quarter. They tried to pull away, but no matter how hard they tried, HCI always found a way to claw back. HCI always remained within striking distance and finally made their move at the end of the third quarter, with Ang Shi He (HCI #6) making a steal and tying the game at 52-52 with a layup.

His opposite number Jefferson Cheong (Jurong #6) then made a three-pointer to give Jurong the slight edge at 55-52 heading into the final quarter.

In the fourth quarter, Cheong Rong Hao (HCI #9) scored four straight points to give HCI the lead for the first time since the first quarter. However, that only sparked Jurong into action as they went on a 13-0 run including three 3-pointers to storm to a 68-56 lead with 4.52 minutes left on the clock.

One might think Jurong would run away with the match, but a series of free throws by Raymond Loo dragged HCI back into contention and he eventually tied the game with a layup. Although he had the chance to give HCI the lead with the three-point play, he missed the free throw and Guo Leibing also missed a pair before Lucas Lim sank the free throw to send Jurong Secondary into the final.

"Good defense was the key to today's game as well as good teamwork by the whole team," analyzed Danish. "During the fourth quarter, we just concentrated on amending our mistakes and fighting on."

Danish also gave his take on the final against Unity Secondary, who easily beat New Town in the other semi-final.

"We have played against Unity in other tournaments and also met them in the C Division last year. It will be a very tough game. We might not win it, but at least try to narrow the score."

Please provide missing names in the comments section. Thanks. 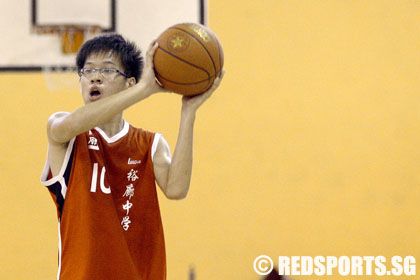 Lucas Lim was the hero for the day as he made the final free throw to send Jurong into the final and HCI crashing out. He also scored the last eight of Jurong’s points including a three pointer. (Photo 2 © Koh Yizhe/Red Sports) 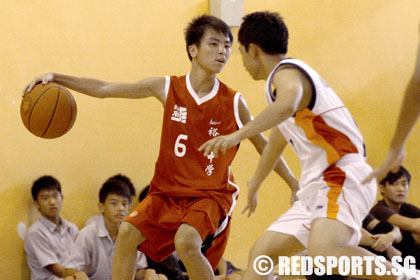 Jurong’s #6 tries to get a play going. He was also key to his side’s victory as he contributed 15 points. (Photo 3 © Koh Yizhe/Red Sports) 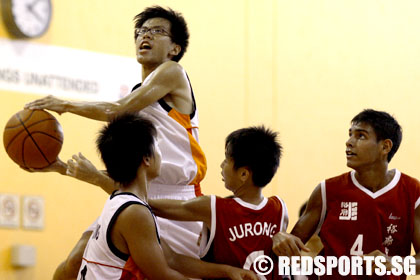 HCI’s Raymond Loo is fouled as he drives strongly to the basket for the layup in the final moments of the match, however, he missed the free throw. It was his only layup throughout the match as he got seven of his nine points from the free-throw line. (Photo 4 © Koh Yizhe/Red Sports) 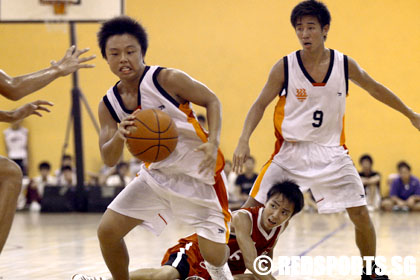 Guo Leibing leaves his opponent on the ground after stripping him of the rebound following Raymond’s missed free throw. He was soon fouled, but he missed both. (Photo 5 © Koh Yizhe/Red Sports) 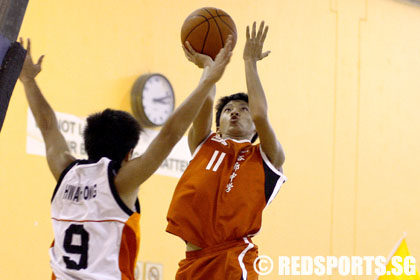 Jia Cheng Lee scored five points for Jurong during his time on court, but he fouled out in the fourth quarter. (Photo 6 © Koh Yizhe/Red Sports) 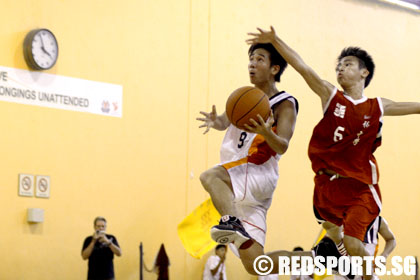 Cheong Rong Hao goes for a layup while his opponent tries to peg him back. (Photo 7 © Koh Yizhe/Red Sports) 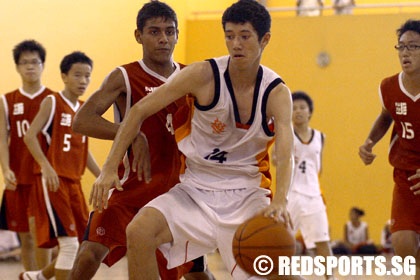 Austin Cooper led his side with 15 points, but it was not enough to send his team into the final. (Photo 8 © Koh Yizhe/Red Sports)

For more photos of the match, go to the GALLERY

Want to vote for YOUR favourite basketball player? Click here!