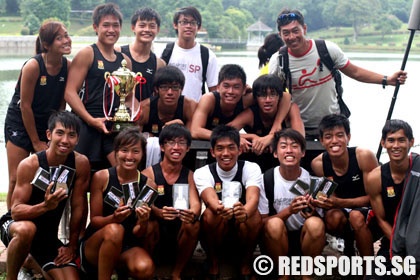 The men’s team managed a top-three finish in six out of the seven events they took part in, chalking up 55 points to retain the title.

Republic Polytechnic were runners-up with 40 points while Nanyang Polytechnic came in third with 26.

SP had a smooth start to the competition, with Willy Tay clinching the K1 1000m men’s title and winning the next final in the K2 1000m. Lim An Chun added another gold to SP’s medal tally in the C1 500m.

The K4 1000m was won by Temasek Polytechnic’s team. The foursome of Randall Tan, Joshua Ng, Tan Yi Chao and Chay Wei Jie pulled away from the pack at the last quarter and did not lose their momentum, leaving Nanyang Polytechnic and Ngee Ann Polytechnic in second and third place.

When asked whether they had expected to win going into the race, Joshua of TP answered: “Yes. Nobody goes into a race expecting to lose.”

The TP team shared that they had to work on their physical strength for the gruelling 1000m race and trained daily, occasionally twice or thrice a day. The men attributed their win to their coach Ong Khe Wat and their teammates.

Ng Yong Ann from Republic Polytechnic was neck and neck with Chew Zhang Jia from Singapore Polytechnic after the halfway point for K1 500m and managed to hold him off to come in first. Zhang Jia was then overtaken by his teammate and captain Jerald Ng at the last stretch and had to settle for third.

“My coach had prepared me already,” Yong Ann shared about the pressure he faced when he went head to head with his competitors from SP.

The RP team had taken part in the National Canoe Championships and MaRritchie Reservior Race before POL-ITE, which built up their experience.

In the K2 500m race, Nanyang Polytechnic’s duo of Marcus Koy and Neo En Kai took the lead at the halfway mark to pip SP and Ngee Ann Polytechnic to win.

The final men’s race was a close finish as all five polytechnics were neck and neck till the end. Eventually, the K4 500m was won by Muhammad Hairul, Ng Yong Ann, Chew Jian Ming and Teo Choun Meng of RP.

SP missed out narrowly and came in second, while third position went to NYP after a video replay by the organisers.

“It was the final official race,” said Muhd Hairul of RP about their motivation to keep pushing on. Choun Meng expressed happiness after winning the race, while Jian Ming acknowledged the hard work their coaches Lee Kai Yang and Toh Kang Wi had put in.

“We tried our best, and put ourselves on a very high standard,” SP captain Jerald Ng answered when asked about the challenges they faced to retain the overall title. He revealed that the team had sacrificed a lot and it was a hard time getting together to train five to six times a week, adding that they “love the sport and want to do well in it”.

“Every single person was critical and contributed to the points [in clinching the title]. We also had a very supportive coach, Mr Goh Poh Soon,” Jerald summed up. 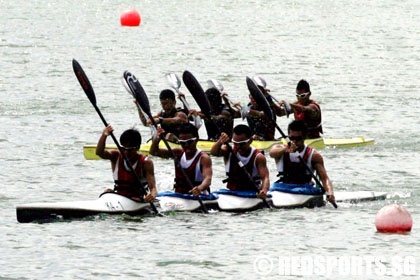 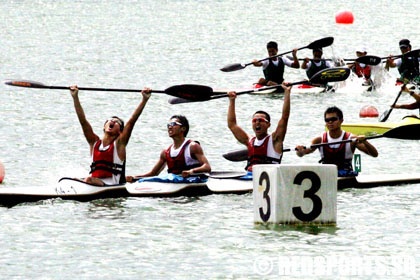 …and give a shout of relief after edging out Nanyang Polytechnic and Ngee Ann Polytechnic. They had worked on their physical strength, sometimes even training twice or thrice a day. (Photo 3 © Koh Yizhe/Red Sports) 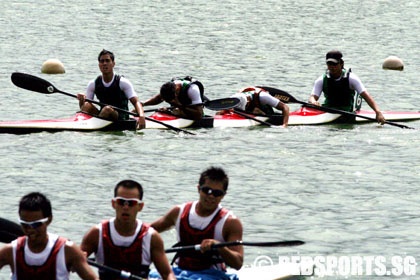 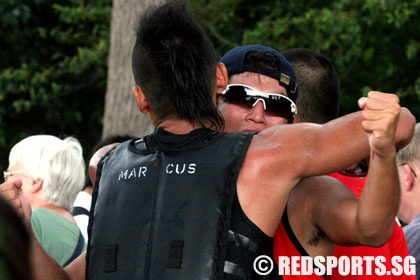 Nanyang Polytechnic teammates embrace. They were rather pleased with their third-place finish. (Photo 5 © Koh Yizhe/Red Sports) 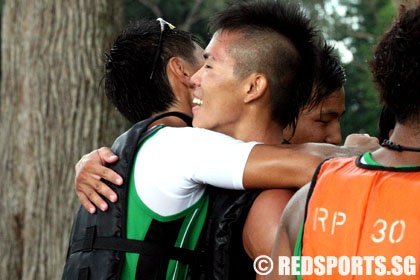 A great moment of sportsmanship as Republic Polytechnic and Nanyang Polytechnic opponents congratulate each other. (Photo 6 © Koh Yizhe/Red Sports)