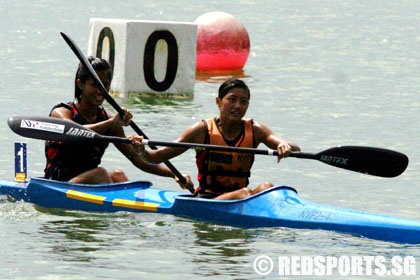 Defending champions RP had to settle for second place with 40 points, just two points behind NYP, and Temasek Polytechnic (TP) took third with 28.

"We are very happy to win! For many of us, it is our third year competing. We won the title in our first year but failed to defend it last year so we're definitely thrilled to win it back this year," Ai Xing commented.

Ai Xing was also a big winner of the day. Her hard work definitely paid off when she won two team gold and one individual gold.

"There was nothing more I could ask for!" Ai Xing exclaimed excitedly.

Fellow teammate, Joyce Ho, shared the limelight after stunning competitor Zhuo Ruiyi from Singapore Polytechnic (SP) in the K1 500m Women's event. It was an intensive race as Ruiyi started strongly with furious strokes and remained consistent throughout the course. Joyce trailed closely behind before pulling away near the finishing line to win another gold medal for NYP.

"My competitor was quite good. I pulled away at the end because I needed to win so that I could get the points for my school. It was my motivation," Joyce said.

NYP's coach, Patrick Fong, was definitely pleased with the results.

"I didn't expect them to win," he said. "I had higher expectations for the girls because the boys started coming down with flu prior to the race. But both teams surpassed my expectations. They were working very hard and I am proud of them."

NYP crosses the finish line first in the last event of the day to seal their championship by two points ahead of RP. (Photo 2 © Koh Yizhe/Red Sports) 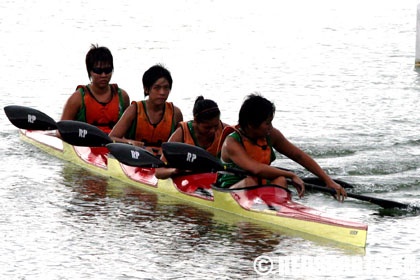 Defending champions RP had to win the K4 500, the last race of the day, to have any chance of overtaking NYP. They finished third. (Photo 3 © Koh Yizhe/Red Sports) 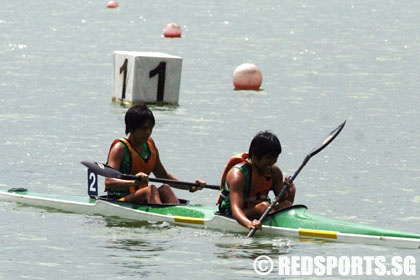 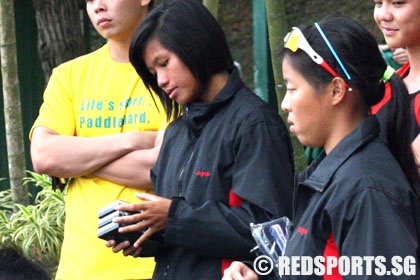 Joyce Ho (middle) was the star for NYP along with Siok Ai Ying (not in picture) as they both clinched three individual medals each. (Photo 5 © Koh Yizhe/Red Sports) 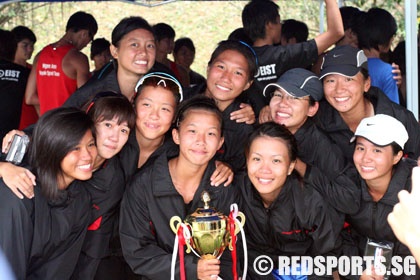