Temasek Polytechnic Stadium, Wednesday, March 25, 2009 – Soh Rui Yong of Raffles Institution won the A Division individual cross-country title for the second consecutive year as the Raffles boys filled six of the top eight positions in a masterful 1-2-4-5-7-8 finish to claim the team title.

Running the 4.6km route around Bedok Reservoir and ending at the Temasek Polytechnic track, Soh triumphantly crossed the finished line in a time of 15 minutes 20.86 seconds. Team-mate Lim Zhi Ming, who finished second at the recent Singapore Biathlon behind Mok Ying Ren, trailed him in a time of 15:21.90. Lee Ming Hui of Victoria Junior College prevented a Raffles Institution sweep of the podium by coming in third in a time of 15:34.92.

Admittedly, he was nervous on the night before the race and “only slept four hours.”

Despite being a cross-country and 5000m champion in 2008 at the National Schools Championships, this race was different from the rest.

“It’s the first time I am going into a race as the favourite,” said Rui Yong after the race. “I have run most races recently with Mok (at the SAA National Cross-Country Championships and Wings Cross-Country Championships) or others (such as the Gurkhas in the 10 km event at Standard Chartered Singapore Marathon) who would lead the pace. This time, I had to be the one leading the pace and running from the front.”

The Raffles Institution team can also be proud of the commanding manner of their win. Their team score of twelve points is only two points above the lowest possible of ten. Even if their fifth and sixth runners’ scores were added to their total team score, Raffles Institution would still have won with 27 points. Victoria Junior College had 33 points from their top-four runners.

When asked about how he felt about his team’s win, Raffles Institution captain Su Yen Bing, in a struggle for words, said that he was “very happy.”

When probed about the secret to their flourishing success, Su added: “We trained very hard, controlled our diets and were very focused and determined. We also struck a balance between studies and running.”

Ruben Galen Demetrius of Kuo Chuan Presbyterian Secondary, after leading for most parts of the race, was caught unaware by Sumanthiran Selvarajoo of St. Joseph’s Institution in the last few metres of the race and lost the individual championship title by a hair’s breadth. Only six thousandths of a second separated the winner Selvarajoo in a time of 15:43.85 from runner-up Demetrius in a time of 15:43.91. Rodrigo Eugene Cyril of Victoria School was third in 15:49.92.

Sumanthiran Selvarajoo, who was the 2007 C Division boys’ champion, was evidently happy with the result.

“I trained for four years for this. I didn’t want to waste any of it.”

On the flipside, Ruben Demetrius displayed obvious disappointment at coming so close to winning.

“I didn’t know he was coming. I only pushed when I realised him closing down on me.”

Demetrius gave an indication of the mistake he made when he said that he thought he “won the race already” though he knew Selvarajoo’s “finishing kick is very strong.”

The surprise of the B Division boys race came when Zachary Devaraj of Anglo-Chinese School (Independent) tripped up near the end of the race before the bridge that took them into the Temasek Polytechnic grounds.

“I was in second place, just overtaking the first guy (at the time) – Ruben Demetrius of Kuo Chuan Presbyterian Secondary – when I tripped and stumbled,” said Zachary. “It disrupted my momentum and I just couldn’t recover.”

Naturally, he was disappointed but conveyed a sense of optimism saying “there’s next year.” Zachary is 15 and in Secondary Three this year.

With the A and B Divisions, there is always a heightened sense of competitiveness amongst the runners. With the C division runners though, there is a greater sense of unadulterated fun and free-spiritedness.

The top-two runners in the C Division, Karthic Ragupathy of St. Joseph’s Institution and Venuraam Selvan of Victoria School who finished first and second respectively, both shared that they are first-timers in the National Inter-School Cross-Country scene. Karthic and Venuraam finished in times of 16:30.24 and 16:30.80 respectively. The top-three finished less than a second apart as Heng Yu Jie of Catholic High School completed the trio in a time of 16:30.99.

The winner, Karthic, showed his youthful exuberance as he eloquently articulated the feelings that went through him as he approached the home-straight down the finish line.

“I had wanted to stop before the track but a creature inside of me erupted and told me to go for it – for the medal and beat the Victoria School guy. I didn’t expect myself to win. It is a surprise. My parents are also very proud of me,” he said.

In finishing second, Venuraam Selvan said that he was “overjoyed.”

LTC Fred Cheong, guest-of-honour at the event and a wing commander at the Officer Cadet School (OCS) also could not help but let on that the “vibrant sound of youth” that he heard “reminded [him] of [his] youth.”

Note: This story only covers the boys’ races. Read the other stories for the report on the girls’ races and summary of the team results. 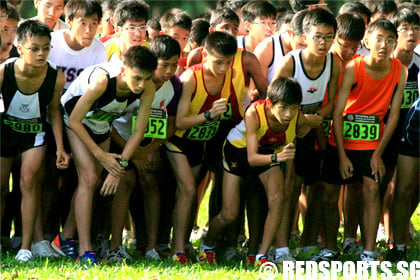 The B division boys shoving and establishing their own space in the pack. (Photo 3 © Vanessa Lim/Red Sports) 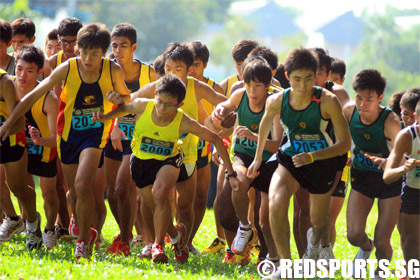 The A Division boys and Soh Rui Yong (#2053 in green) off to a flying start. Third-placer Lee Ming Hui (#2009 in yellow) was the only non-RI runner in the top five. Runner-up Lim Zhi Ming is between the two of them. (Photo 4 © Vanessa Lim/Red Sports) 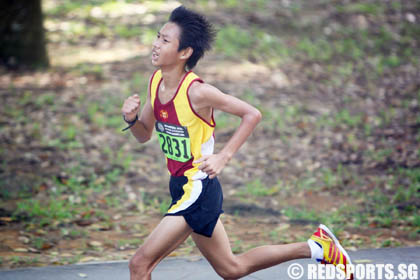 Bryan Yong of Victoria School finished 2nd in his team and 4th overall to help the team to the C Division title. (Photo 5 © Marvin Lowe/Red Sports) 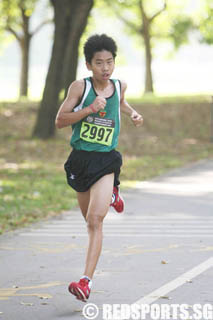 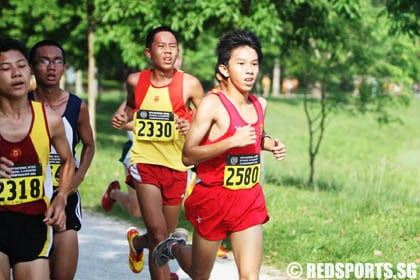 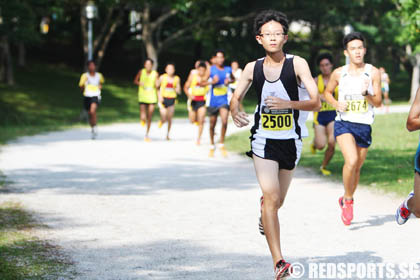 The B Division boys battle for positions along the trail around Bedok Reservoir in sunny and at times windless conditions. Darren Ang (#2500) of Catholic High School eventually placed 23rd. (Photo 9 © Marvin Lowe/Red Sports) 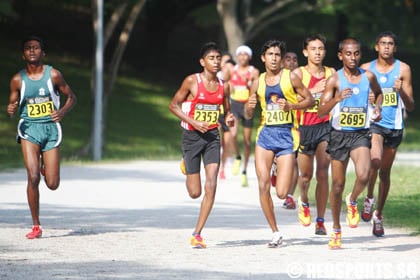 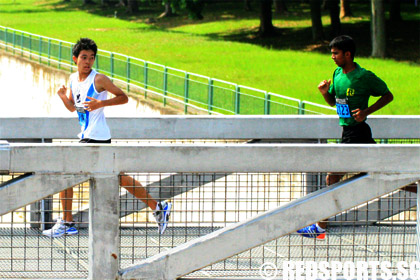 A runner looking back to see who is catching up with him as the runners cross the bridge that would take them into the Temasek Polytechnic compound. (Photo 11 © Vanessa Lim/Red Sports) 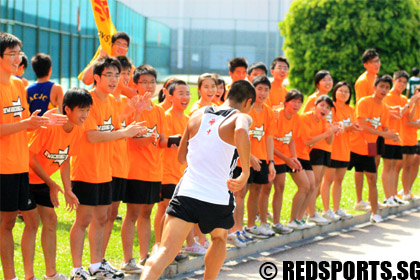 Hwa Chong supporters cheering one of their own as he approaches the track. (Photo 12 © Vanessa Lim/Red Sports) 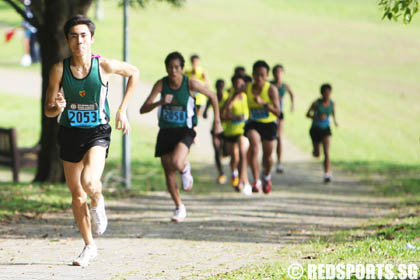 The breakfast of champions: Hamburger-Hills, just like a Saturday morning at MacRitchie Reservoir – Soh Rui Yong on his way to his second individual title as he leaves team-mate Lim Zhi Ming (#2058) and a chase-pack consisting of mostly Victoria Junior College and Raffles Institution runners trailing in his wake on the way up the only hill on the course. (Photo 13 © Marvin Lowe/Red Sports) Bryan Yong of Victoria School raises his hands in celebration at finishing 4th. On the left of the picture is pre-race favourite Marc Amiruddin of the Sports School who finished 6th. (Photo 15 © Les Tan/Red Sports) Sumanthiran Selvarajoo (#2303) makes the surge down the home-straight that saw him pip Ruben Demetrius of Kuo Chuan Presbyterian (#2695) at the line. (Photo 16 © Les Tan/Red Sports) Zachary Devaraj of the Anglo-Chinese School (Independent) rues what could have been after the race. (Photo 23 © Les Tan/Red Sports) Only two of the top-eight were not from Raffles Institution and they were both from Victoria Junior College. Here is the second of the two, Lian Wei Cong, who finished in 6th place. (Photo 27 © Les Tan/Red Sports) The vociferous Victoria School support was enduring and passionate as they were the only group who opted to stand away from the shelter of the grandstand to cheer on their runners on the field right by the track and finishing line. (Photo 29 © Marvin Lowe/Red Sports) 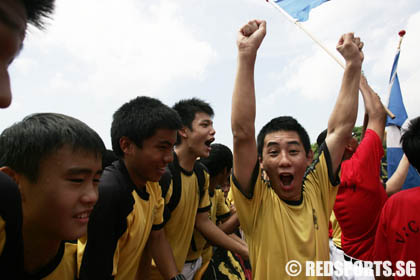 A Victoria School supporter raises his hands in jubilation as it is announced that their C Division team has won the team title. (Photo 30 © Marvin Lowe/Red Sports) 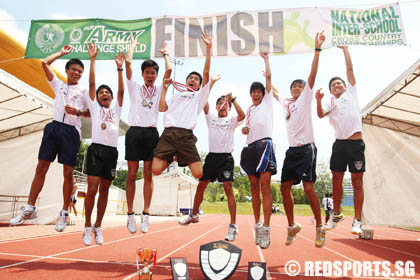