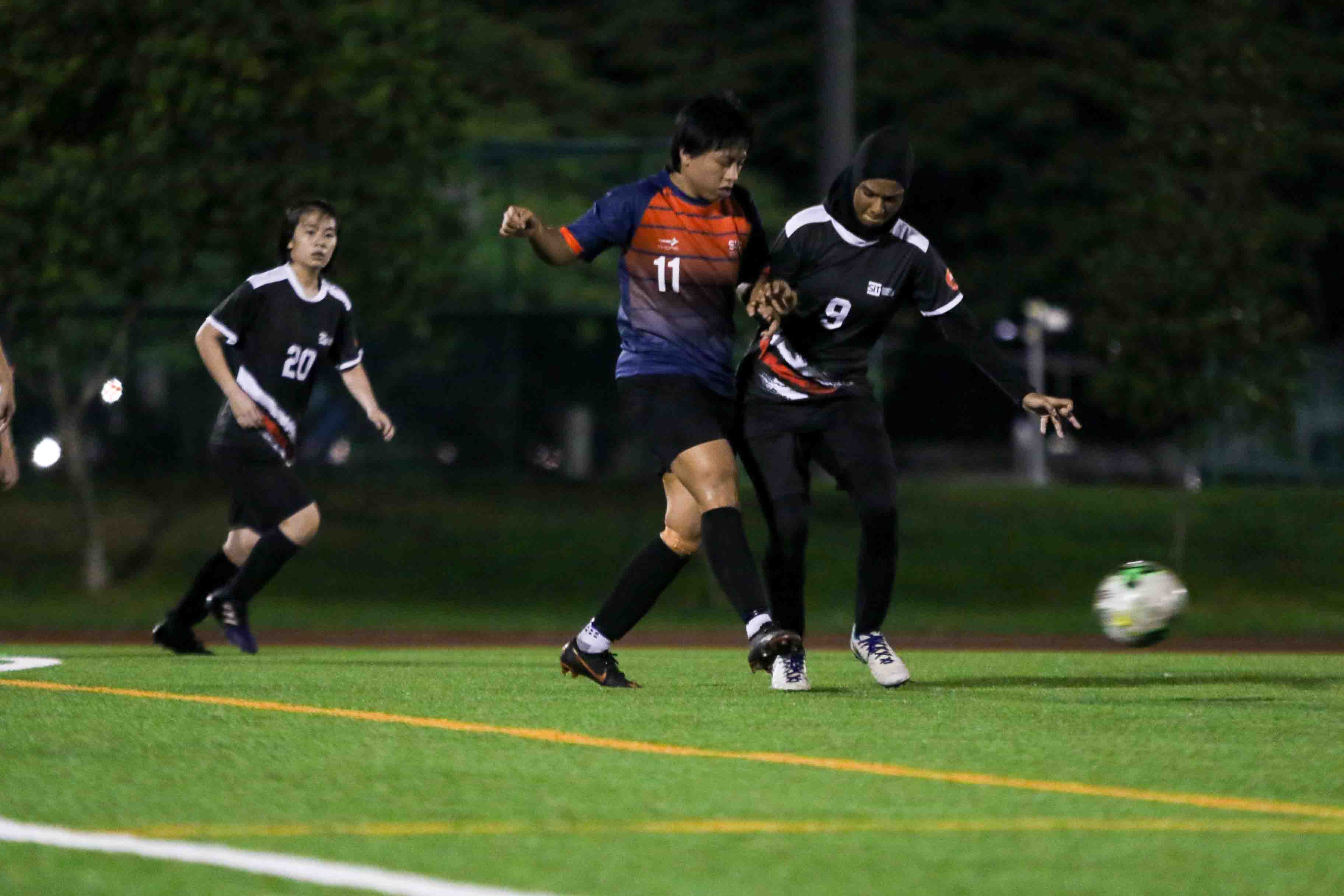 National University of Singapore, Friday, October 11, 2019 — Four goals from Darvina Halini (SUSS #11) was just enough to help Singapore University of Social Sciences (SUSS) come from behind to edge out Singapore Institute of Technology (SIT) 4-3 and seal qualification for the Institute-Varsity-Polytechnic (IVP) Games.

With both teams fighting for a spot in next year’s IVP, it was an evenly matched and tightly contested game. SIT started the game off on the front foot, attacking right from kick-off and getting their first shot on goal within the first few minutes of the game.

“We went into the game with the mentality that we would give our all on that field, and that’s what we did,” said SIT’s captain Ting En (SIT #3). Their attacking intent soon paid off and they found the breakthrough in the ninth minute when Krithi (SIT #10) intercepted a pass near the halfway line and proceeded to lob the ball over SUSS’s keeper Siti Radiah (SUSS #3) giving SIT the early lead.

The SUSS defense struggled to get control of the game and clear the ball effectively. Just five minutes later they found themselves in trouble again, this time it was Vinita Sheri (SIT #11) who scrambled through and managed to tuck the ball into the back of the net.

The game continued with both teams battling intensely. SUSS had their fair share of attacking play as well, and they managed to get a goal back just before the end of the first half through Darvina Halini (SUSS #11) despite claims from the SIT defense that she was in an offside position.

After the break, SUSS came back looking like the more dangerous side and 15 minutes into the second half, Darvina (SUSS #11) scored her second goal of the game and SUSS’s equalizing goal after SIT failed to clear the ball from a corner kick.

After successfully overcoming the two goal deficit, the SUSS team were driven to turn the tables and take the lead. In the 70th minute, SUSS finally gained the advantage through Darvina (SUSS #11) as she completed her hat-trick with a long-range attempt which dipped under the bar just out of reach for SIT’s keeper Shid (SIT #99).

SUSS’s captain Nadya Zah (SUSS #12) stated: “We laid each other’s responsibility and roles and managed to counter their advancing attacks with our strengths. Though there were mistakes made, we strove forward until the full time whistle.”

With just 10 minutes left to play, the game picked up in intensity as SUSS attempted to cling on to their slender lead. But a penalty awarded to SIT and converted by Winette Lim (SIT #13) put the game back on level terms.

The deciding goal of the game came just three minutes later. A counter-attack by SUSS saw Darvina (SUSS #11) 1-on-1 with SIT’s keeper, and making no mistakes she calmly slotted the ball into the back of the net to regain the lead for SUSS, bringing the final scoreline to 4-3.

For SIT, the lost meant that they have failed to qualify for IVP; despite the disappointment, their captain Ting En (SIT #3) encouraged the team to take this result in their stride and use it as a learning point.

“I could tell that everyone was pushing their limits out there in all of our games and I’m immensely proud of their performance regardless of the score,” said Ting En. “We have improved tremendously since we first started the team four years ago, and we’re only going to go up from here. We will definitely come back stronger next year.”

This comeback win guaranteed SUSS a place in next year’s IVP, a position which they had been eyeing since the start of SUniG, said SUSS’s captain Nadya Zah (SUSS #3). She added: “It is a humbling experience for our SUSS women’s squad as the team is only going into our 2nd year together and I hope the fighting and never-give-up attitude will always be the drive for this team in the years to come.”

SUSS will play their final game against NUS on Thursday, 25 October, 7.30pm at NUS.