SUniG Football: NUS and SMU settle for a point in exciting 0-0 draw 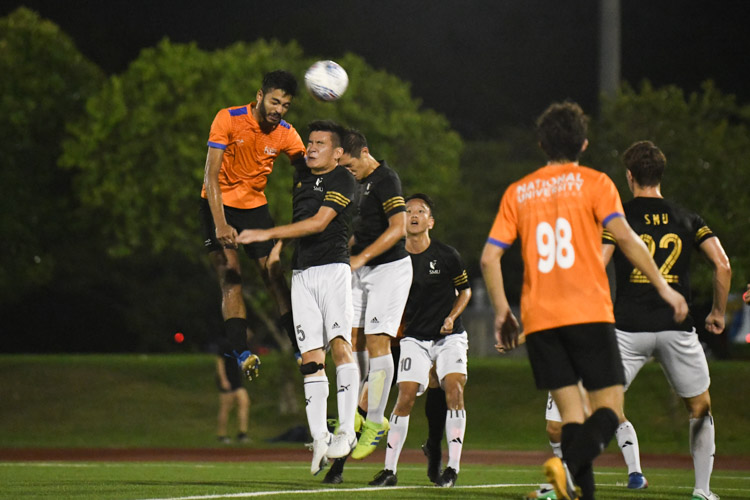 NUS and SMU played out an exciting end-to-end match which ended in 0-0 draw. Both teams wasted chances in front of goal while also faced with stellar performances by their goalkeepers. (Photo 1 © Stefanus Ian/Red Sports)

SMU’s goalkeeper Ragene Ng (#1) was in fine form, denying the home side from grabbing three points. While both teams felt they could have taken the victory, a draw was a “well deserved” result said SMU captain Abdul Mateen (#4)

“I thought we played very well, if we could just convert one of the few chances in the second half we could have gotten the game,” said the SMU defender.

Mateen said his team went into the match with the intention of going for the win and they did have a few chances to kill the game but was unable to do so.

“Traditionally, NUS has always been one of the strongest team in the league, so SMU is always the underdogs, so sometimes getting a draw with these kinds of teams, against a stronger team, I think we can be happy, but we can always go for the win,” added the 24-year-old.

The first chance for NUS came within the opening minutes when a cross fell nicely for Syabil Anwar (NUS #23) in the box but he simply could not get enough power on his header as SMU’s custodian Ragene Ng (#1) comfortably saved the shot.

The best chance for the boys in orange perhaps came in the 12th minute when Kasey Cummings (#98) picked up a clearance down the right flank and sent a long cross into the box towards the onrushing Syabil Anwar (#23). Syabil tried to volley the ball first time and got power behind the shot but he simply could not keep the ball down as the ball whizzed agonisingly over the bar.

While the home side looked more dangerous on the attack, their poor finishing let them down as they could not convert. SMU meanwhile had fewer chances but almost took the lead as well.

The visitors had their opportunity near the half-hour mark when Mattias Wahman (#22) picked up the ball in a dangerous area close to the goal before unleashing a low shot towards the left bottom corner. NUS’ goalkeeper Gabriel Teo (#18), however, was equal to the task, diving instinctively to push the ball out for a corner.

Before the half ended, NUS made a substitution, taking out Carman Koh (#20) and bringing on Ayyadarshan Kasivishvanaath (#9). Ayyadarshan made an instant impact creating a few chances for his side but ultimately could not put them in front.

In the second half, SMU’s Ragene was called into action early on in the 48th minute when NUS managed to send a cross into the box but their header was parried away before being smothered by the goalkeeper.

Both teams were not holding back and the game swung from end-to-end. But NUS was beginning to make mistakes at the back around the hour mark.

A miscommunication between their defenders and goalkeepers resulted in their clearance ricocheting off an onrushing SMU forward. Gabriel Teo (NUS #18) had to be alert and managed to dive in time to catch the ball.

While SMU began taking the game to the home side, both sides were beginning to feel the strain of the end-to-end action of the match as cramps and fatigue sets in. Neither NUS nor SMU could find their scoring boots as the referee eventually ended the match with the score tied 0-0.

NUS coach G Sivaraj said he was “happy with the point” and told his boys not to be too disappointed, heaping praise on the SMU goalkeeper.

“Their keeper was brilliant, those (chances) that we connected well he was in the right position and there was one bottom corner (shot) that he dived and saved,” said the 36-year-old coach.

“I thought it was a very good entertaining game, end to end action and good attacking football… of course, if we got the three points it would have been better but I’m okay because the performance was there and it was just one of those days, I am not disappointed.”