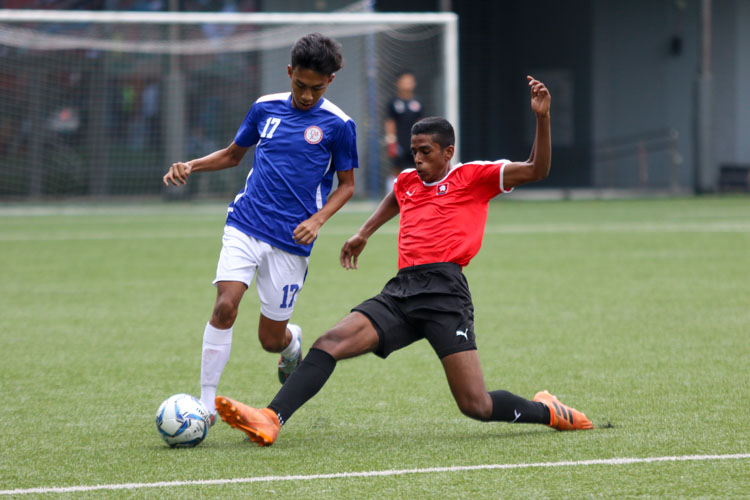 Our Tampines Hub, Thursday, May 16, 2019 — Nanyang Junior College (NYJC) held onto the bronze medal they attained at last year’s National A Division Football Championship with a convincing 5-2 win over Tampines Meridian Junior College (TMJC) in this year’s bronze medal playoff. Four out of the five goals from NYJC were scored in the second half of play.

Said NYJC team captain Liam Breen (NYJC #6): “Coming into the third and fourth after losing 4-0 in the semis, we were all extremely nervous. However, I felt that we showed what we are capable of and played our best match of the season.”

“Fair play to the other team as well for not giving up for the whole game even when 2-0 down. Overall I think it was a very tough match for both teams, both teams gave it their all and we worked hard to come out on top in the end,” he added.

The game started off 30 minutes past schedule, with kick-off delayed due to a lightning alert.

TMJC entered the game strongly from the first whistle, with a corner given to them in the fourth minute of play. Unfortunately, the corner taken by Hameezan (TMJC #23) flew straight into the side netting.

The breakthrough for NYJC came 30 minutes into the first half, with a goal by Javier Chua (NYJC #7). Following a scramble in the box after a cross in, Javier neatly headed the ball into goal to send his team a goal up.

In the second half, just three minutes into play, NYJC doubled their lead with a goal by Gabriel Lee (NYJC #2). Gabriel calmly received the ball from a cross by Gareth Yeo (NYJC #18), and dribbled it into the box, slotting his effort into the bottom left of goal.

Not willing to go down without a fight, TMJC responded just one minute later with a goal by Aatiq (TMJC #19). With a shot at goal rebounding his way, Aatiq controlled the ball to drive it into the bottom right of the net.

However, TMJC were not done yet. Just twelve minutes later, in the 56th minute, TMJC equalised through a goal by Jordan Ng (TMJC #11).

Collecting a through ball from Hameezan (TMJC #23), Jordan dribbled the ball into the box. NYJC keeper Shane Lau (NYJC #1) came out and committed too early, leaving Jordan to simply let the ball roll into goal.

Jordan (TMJC #11), who was also man of the match, said: “I felt relieved and motivated (after the equaliser) to go on and challenge for the win in regulation time.”

However, NYJC were keen to reclaim their lead and responded with a goal three minutes later.

Receiving a pass in the box, Vasileios Zikos Chua (NYJC #9) sent a rocket of a shot into the top left of the goal, out of reach of TMJC keeper Antonio (TMJC #1).

TMJC almost equalised once again in the 63rd minute, following a corner by Jordan (TMJC #11). Unfortunately, the ball was cleared away for an NYJC counter attack.

NYJC stretched their lead over TMJC with another goal in the 67th minute of play. Following a cross into the box from Julio Agustin Punsalan Tan (NYJC #16), it was Rohith S/O Ravichandran (NYJC #11) who headed his effort downwards, sending his ball rebounding into the net.

Scoring the fifth goal for NYJC in the 73rd minute was Zikos (NYJC #9), who claimed his second goal of the game with a neat piece of skill inside the box.

Controlling a through ball, Zikos (NYJC #9) cut past a TMJC defender to come face to face with TMJC keeper Antonio (TMJC #1). Keeping his cool, Zikos sent a measured shot into the bottom left of goal, just out of reach of the keeper.

Sharing his thoughts, NYJC team captain Liam Breen (#6) said: “I was really relieved when we got that last goal because it meant it was almost impossible for TMJC to come back. I definitely didn’t expect that scoreline coming into the match, we knew that TMJC were a solid team who didn’t concede many goals so scoring five against them really was unexpected.”

With the sound of the final whistle, the final score stood at 5-2.

“I was really joyous when the final whistle finally went as it meant that we finally won after the tough match. I was just very elated that we managed to clinch third place,” said Liam (NYJC #6).

Ending it off, he thanked his team for the season: “Thank you all for giving everything to the team and not losing hope. I know that we expected better but I’m really proud that all of you left everything out there in the field, and I can’t thank you guys enough for everything. I’ll definitely miss playing with you guys and I am confident that you all will be champions next year.”

Said Jordan Ng (TMJC #11): “I feel that it was an extremely tough game both physically and mentally. The opponents were ready for us, and was a thrilling match to play.”

Similarly, he thanked his team for the season: “With every defeat we can only get stronger. Remember the feeling, and make sure you don’t experience it again next season.”