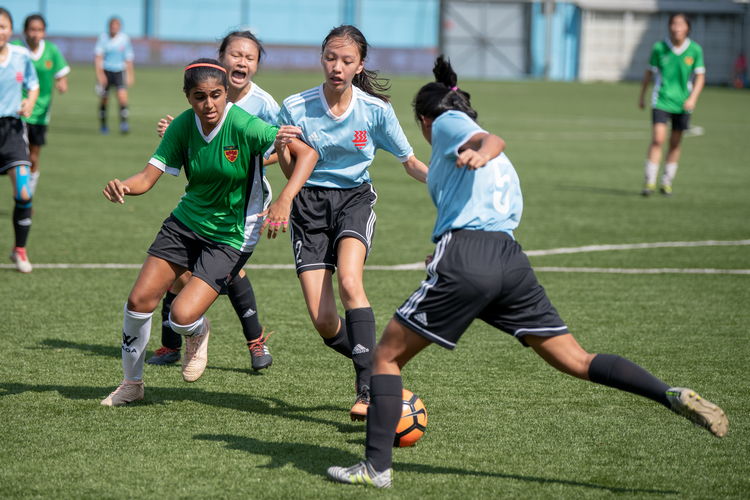 HCI scored an early goal — the only goal of the game — to win 1-0 against Raffles. (Photo 1 © Jared Khoo/Red Sports)

Jalan Besar Stadium, Tuesday, May 7, 2019 — In a tight match between Hwa Chong Institution (HCI) and Raffles Institution (RI) in the third and fourth placing match of the National A Division Football Girls’ Championship, a lone goal in the first half ensured that HCI claimed the win.

Speaking after the match, HCI team captain Carissa Lee (HCI #4) said: “The match was really exciting. It was a well played match as both sides really gave our best. And I’m glad that my team pushed through all the way to the last minute and never gave up.”

The game started off with HCI attacking from the sound of the whistle, pressuring the RI defense.

HCI won their first corner in the third minute of play, but the delivery into the box was swiftly cleared away by the RI defenders.

There were multiple chances for HCI in the box, but they failed to convert any of their attempts. However, it soon became a back-and-forth between the two teams, and they were equally matched by the middle of the second half.

However, a momentary lapse by the RI defense led to the first goal of the match in the 19th minute by HCI.

Sending a through-ball into the box, the RI defense was beaten, leaving Claudia Chia (HCI #5) to simply run into the box and tap the ball in.

On the goal, Carissa (HCI #4) said: “I was very thankful that we converted in the first half as it fuelled the team and gave us more confidence to push on to secure the win.”

During half-time, RI made substitutions to both their defense and attack, a stark change that impacted their game positively.

In the 52nd minute, Milanpreet Kaur Bajwa (RI #13) made a solo dribble from midfield — however, her shot at goal deflected off a HCI defender and rolled past the far post.

Just seven minutes later, RI were almost set to score their first goal of the game through another effort by Milanpreet (RI #13), when she was fouled inside the penalty box.

However, the referee deemed the foul to have been committed outside the box, and gave RI a freekick. This decision drew loud protests from the RI coaches and supporters alike.

The resulting freekick by Milanpreet (RI #13) flew over the crossbar, to cheers of encouragement from the RI crowd.

In the 67th minute, RI showed some good passing football when a throw-in by Rebecca Ng (RI #14) was dribbled into the box by Nur Syahindah (RI #17). The ball was then laid off to Milanpreet (RI #13), but the resulting shot was sent directly at the HCI keeper, Celeste Tay (HCI #1).

With no new developments in the end of the second half, and both teams feeling the fatigue from the heat, the match ended with a final score of 1-0.

An excited Carissa (HCI #4) shared: “I was so happy. It was like all our trainings had paid off and the team spirit we had built throughout this journey was so strong. It definitely wasn’t easy but I was so proud of all of them and at the same time I was so thankful for all that helped us come so far, including our coaches, seniors, family and friends.”

Thankful for the experience, RI team captain Catherine Kausikan (RI #21) said: I felt like we gave HCI a good fight, and I think we can walk off that pitch proud of our performance. Despite initially not really being able to get the ball into the box during the first half, and the fact that their goal went in relatively early — I’m very proud that we kept pushing and believing.”

Adding on, she said: “While we may not have won, I think I can safely say that we lost with dignity and gave it our best fight, and there were quite a few moments where my team were playing like how our coach Mr Leong wanted us to play — proper passing football, and it was super heartening to see them on the field connecting as a team in our last match.”

Ending it off, Carissa (HCI #4) said: “I would like to thank my team for believing in us, and for giving their best. Though it was tough, our spirit and determination helped us to reach Jalan Besar Stadium once again. I am so proud of all of them. To the juniors, let’s continue this Hwa Chong spirit and fight all the way!”