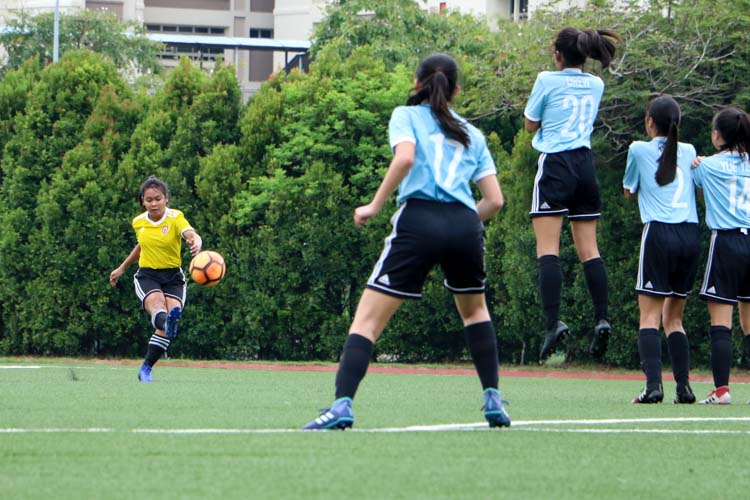 Tampines Meridian Junior College, Wednesday, April 24, 2019 — Victoria Junior College (VJC) emerged victorious in the semi-finals against Hwa Chong Institution (HCI) after a nail-biting penalty shootout. Having ended the game 0-0 after extra time, VJC managed to keep their composure to advance to the final of the National Schools A Division Football Girls’ Championship.

The match was a repeat of last year’s final where VJC faced HCI, right down to the scoreline and the match having to be decided on penalties.

VJC team captain Isabelle Tay (VJC #15) was relieved with her team’s win, saying: “I felt that the match today was a really close one, we couldn’t let our guards down and the forwards and midfield had to keep on pressing their defense line almost throughout the entire match. It was one of the mentally tougher matches that we had to play.”

Similarly, HCI team captain Carissa Lee (HCI #4) said: “I felt that it was a good match, not one that was dominated by either party. It was a well played match as both sides gave their all and never gave up.”

The game started off with VJC attacking strongly — in the fifth minute, they were awarded a free kick just outside the box.

Nur Darwisyah (VJC #12) almost scored directly from the free kick, but her effort sailed just over the bar, landing on the top netting.

The dynamics of the game were set very early on, with VJC attacking, and HCI taking on a more defensive stance.

VJC almost scored again from a corner in the ninth minute, leading to a scramble in the box. However, with little room to shoot, the shot by Sophia Rose Meyers (VJC #4) went straight at HCI keeper Celeste Tay (HCI #1).

The match soon progressed into a midfield battle, with neither side making headway towards goal. Whenever the VJC attackers went into the box, they were immediately outnumbered by the HCI players, who soon started the counter attack.

With that, the first half ended with a score of 0-0.

Just six minutes into the second half, VJC almost scored the first goal of the game with a fast curling shot at goal that unfortunately went into the side netting.

The HCI team were calm and collected, keeping their composure despite the repeated attempts to score by the VJC forwards.

With three minutes of play left in the second half, the lightning warning system was activated, to the frustration from both sides.

After 20 minutes, the lightning risk was finally lifted and play resumed. With no headway made into the second half, and the match still goalless at full-time, the game entered into extra time.

Extra time was a repeat of the first two halves, as VJC tried to attack, but were overloaded by the HCI defense. With no goals scored at the end of extra time, the game went into penalties.

Going into the penalties, HCI team captain Carissa said: “I told my team that they played an amazing match, and I am so proud of every single one of them for giving their best. Anything can happen during penalties so I needed them to focus and give it their best shot.”

VJC team captain Isabelle (VJC #15) added: “I was pretty disappointed because my team and I actually made a pact from last year to not go to penalties, but we have all been training hard in this field so I was confident that my team would be able to rise to the occasion.”

VJC kickstarted the penalty shootout, with Ishizeki Ren (VJC #7) taking the first shot. Her effort sailed effortlessly into the top left of the goal, to applause from her teammates.

HCI’s first penalty taker Drew Nicole Saurajen (HCI #20) missed her penalty, sending it past the far post, to the distraught of her teammates.

It was VJC’s Nur Darwisyah (VJC #12) who stepped up next, sending her coolly-taken penalty into the bottom right of the goal.

With pressure building, HCI’s second penalty taker, Nicole Lim (HCI #21), kept her calm as well, sending her shot into the top right of the goal.

It was soon three in three for VJC, with Joie Teo (VJC #10) sending her penalty into the middle of the net.

HCI’s third penalty taker Christine Gan (HCI #12) converted as well, sending it to the bottom right of the goal.

The next two shots for VJC were unfortunately missed, with VJC team captain Isabelle (VJC #15) had her shot blocked, while Erica Lee (VJC #21) saw her shot hit the post.

With these two shots blocked, HCI had an advantage to win the penalties as fourth penalty taker Goh Yue Ye (HCI #14), sent an unsaveable shot into the top right of the net.

Stepping up to the spot, HCI goalkeeper Celeste (HCI #1) could ensure her team’s victory if her shot went in. The HCI and VJC girls waited with bated breath as Celeste took her shot. Unfortunately, her effort sailed over the bar, to the relief of the VJC girls.

With the scores even after five spot-kicks apiece, the shootout went into sudden death.

Even with heavy responsibility on her shoulders, Sophia Rose Meyers (VJC #4) effortlessly took her penalty, sending it into the bottom left of the goal.

HCI’s Josephine Seng (HCI #9) equalised the scores again, as her effort sailed into the top right of the net.

Next, VJC’s Danielle Lim (VJC #23) hit the ball square into the middle left of the goal, as the VJC girls waited in anticipation for HCI’s penalty taker to take their next shot.

Unfortunately, it was not meant to be for HCI, as Cherie Yeo (HCI #8) missed her penalty, sealing the win for VJC.

Running towards their keeper Insyirah Maritz (VJC #24), the VJC girls collapsed in a heap in front of goal, their spot in the final secured.

Reflecting on the match, HCI team captain Carissa (HCI #4) said: “It wasn’t easy and I am very proud of every single member of the team. Throughout the match, we continuously worked together and never gave up, and I am thankful for our unwavering spirit all the way to the end.”

With the 3rd/4th placing match ahead, Carissa had words of encouragement for her team: “I would like to tell them that I hope we can work together as a team to play our very best for this final match. Let’s go Hwa Chong!”

VJC are set to face Saint Andrew’s Junior College in the final, while HCI will face Raffles Institution in the 3rd/4th placing match.