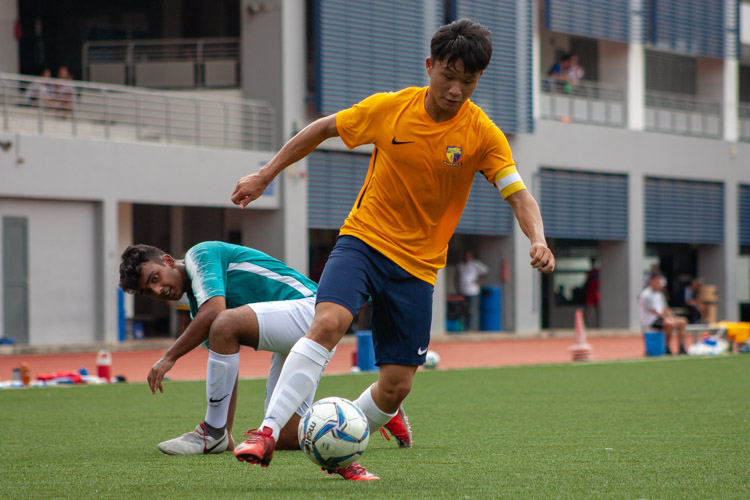 Keith Goh (ACJC #10) gets past a ASRJC defender after skipping past his mistimed challenge. (Photo 1 © REDintern Jordan Lim)

Out of the nine goals scored by ACJC, four were scored by Rohin Ramachandra (ACJC #18).

After the match, an elated Rohin (ACJC #18) said: “I felt that today’s game was a brilliant performance by our team. Our attack was lethal out there today especially with the support offered from the midfield, and our defense was well-organised.

“Our coaches really pushed us today and they’ve taught us so much over the past few months; we could not have won today without them. I think the whole team played with confidence throughout the game and that’s what I felt was most important.”

The goalscoring started off early in the first half, with a goal by Jubilant Chew (ACJC #16) in the third minute of play.

Jubilant (ACJC #16) scored after the ASRJC keeper, Derek Ng (ASRJC #17) fumbled with the ball, allowing Jubilant to body the ball into the goal.

Another goal for ACJC came just eight minutes later in the 11th minute with a goal from Rohin (ACJC #18). After intercepting a pass, Rohin took a shot from outside the box, his effort sailing easily into goal.

In the 27th minute, ASRJC scored their first goal of the match with an effort by Muhammad Shalihin (ASRJC #10).

The goal came from a freekick taken by Shalihin — the shot was attempted to be tipped over the bar by the ACJC keeper, but the ball spilled into the back of the net, bringing the score to 2-1.

Just mere minutes later, Rohin (ACJC #18) scored his second goal of the match, neatly tucking in a goal to increase his side’s lead to 3-1.

Just as the first half was wrapping up, another goal came for ACJC in the last minute of the first half, this time through Ryan Matthew Tan (ACJC #8).

Unmarked by the ASRJC defenders, this left plenty of open space for Ryan to dribble — running into the penalty box, he hammered the ball into the far post.

With that, the score at half-time stood at 4-1.

ASRJC team captain Izzat Muhaimin (ASRJC #8) shared what he told his team going into the second half: “I told them that the game was not over yet and that they need to keep their heads up and continue fighting even if we were losing.”

The second half kicked off with some early drama, as ACJC were awarded a penalty in the 48th minute after Rohin (ACJC #18) was fouled inside the box.

Stepping up to take the penalty, the first-year junior college student calmly slotted the ball into the bottom left of the goal to claim his hat-trick.

Just 11 minutes later, Rohin (ACJC #18) scored another goal, his fourth of the match, with a spectacular no-look goal.

Standing with his back facing the goal, Rohin coolly received the ball on the volley to backheel it into the net, widening the scoreline to a whopping 6-1.

“Scoring four goals feels amazing but it isn’t an easy task. I definitely had the vision of scoring as many goals as I could in my head on the way to the match — making sure that I took every chance I got to help secure the victory for my team was my top priority during the game. With all that being said, I couldn’t have done what I did today without the help of my teammates,” said Rohin.

The last 10 minutes of play were a scoring frenzy for ACJC, with three goals scored by three separate players.

The first of three came in the 70th minute, when Ng Zheng Yang (ACJC #15), who had just been subbed on minutes ago, received a cross into the box from Keith Wang (ACJC #13).

With the ball not cleared out quickly, Zheng Yang ran forward to blast the ball past the substitute ASRJC keeper, Tan Jun Peng (ASRJC #1), into the top corner of the net.

The second of the three goals came just two minutes later in the 72nd minute, with a goal by Harith Raiyan (ACJC #11).

Confusion in the box following an ACJC freekick caused Harith to be unmarked, allowing him to easily head the ball into the back of the net.

The last goal of the game came in the 75th minute, with Ryan (ACJC #8) sealing his brace.

ASRJC custodian Jun Peng (ASRJC #1) missed a ball fired at him, causing the ball to bounce behind him. Reacting quickly, Ryan ran behind the keeper to poke the ball in, cementing his team’s win.

With the sound of the referee’s whistle, the final score stood at 9-1.

“I think that the opponents put up a good fight throughout the game. Regardless of the scoreline, they put in a good effort and really made our team work hard for the impressive scoreline,” said Rohin, on his opponents ASRJC.

Likewise, Izzat (ASRJC #8) said: “I think that ACJC were a good team and they managed to make full use of all their opportunities. We will remember and take this match as a lesson for us and we will come back stronger for our remaining games.”

Ending it off, Rohin had some encouragement for his team: “Believe in yourself. We have worked so hard in training week in week out, and we’ve made so many sacrifices for our team. I don’t want to see all of our hard work go to waste, so let’s play our hearts out and our socks off in the next few games and get as far as we can go in the competition.”