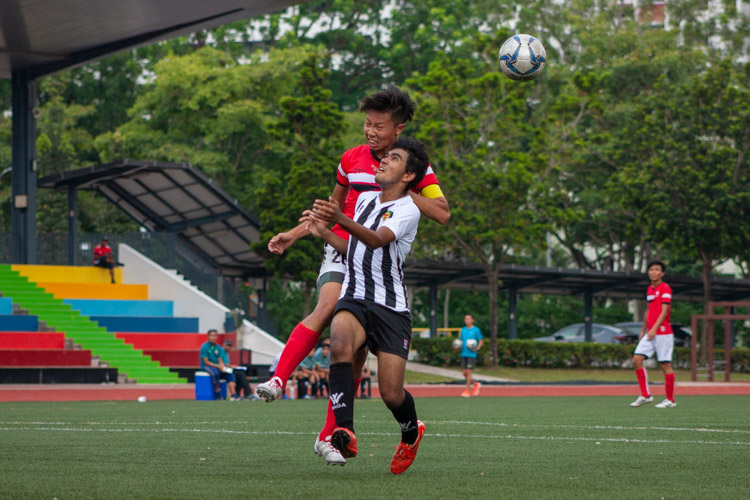 Millennia Institute, Monday, April 8, 2019 — Raffles Institution (RI) took all three points in a preliminary round game of the National Schools A Division Football Boys’ Championship against National Junior College (NJC). The match ended with a final score of 2-0 — this comes even after RI were denied two penalties after handballs by NJC in the box.

After the game, RI teacher-in-charge, Mr Lawrence Sunderaj said: “I think they played their best. They had their good moments, and I think we had a lot of good opportunities. We were up against worthy opponents — we had a penalty, so we were quite fortunate to get it in the end. All in all, I am quite pleased with the boys’ performance.”

The match started off with an RI attempt at goal in the first minute, laid off nicely by Haaroon Silmi (RI #12). However, the resulting shot went wide of the goal. Nonetheless, this set the tone and intensity for the start of the match.

Another opportunity for RI to take the lead came just six minutes later, when RI were awarded a corner kick. The corner was headed by Haaroon (RI #12) but agonisingly hit the bar, and was quickly cleared by the NJC defense.

In the 14th minute of play, NJC were awarded their first corner of the game. Unfortunately, nothing came out of it as the attempt was blasted high above the bar.

Three minutes later, in the 17th minute, RI broke the deadlock with the first goal of the match by Emir Haady (RI #10).

The goal started off with a freekick by Haaroon (RI #12) after he was fouled just outside the box. In the ensuing scramble to clear the freekick, Emir (RI #10) quickly ran forward for a simple tap-in to make the score 1-0.

RI had many consecutive shots at goal, but almost all the shots were aimed directly at the NJC custodian, Jeong Young (NJC #13).

In the 34th minute, there was an obvious handball by one of the NJC defenders, calling shouts for a penalty from the bench and supporters alike — this was the second time it had happened, the first being just a few minutes earlier. However, the pleas fell on deaf ears as the referee called for a mere throw-in after the ball rolled out of play.

On the handball, Mr Lawrence said: “Maybe we should have been given a penalty, maybe we shouldn’t have, it’s not easy to make such calls so I wouldn’t comment much on whether it should be given. Ultimately, we respect the decision of the referee.”

When asked what he told his team at half-time, NJC captain Jonathan Chen (NJC #26) said: “We were losing 1-0 at half-time and the spirit was a bit down. I reminded the team that we were only one down and a comeback is more than possible. All we had to do was start the second half positively, which we did, and to take our chances.”

The second half started off in a dramatic fashion, as Rajakumar Nityasundar (NJC #9) was shown a yellow card for his foul on Ethan Lim (RI #5) in the 42nd minute.

RI almost widened their lead in the 46th minute when Ryan Lim (RI #14) ran in for a loose ball. However, his low shot rolled past the bottom right post, ensuring the score still stood at 1-0.

In the 63rd minute, RI were awarded a corner — the resulting scramble in the box led to a foul by NJC, forcing the referee to finally call for a penalty to be given to RI.

The penalty, taken by Haaroon (RI #12), was cooly slotted into the left side of the net, bringing the score to 2-0.

As such, the match ended with a final score of 2-0.

Acknowledging the performance put up by NJC, Mr Lawrence said: “They put up a commendable fight, and they were very effective in their defence. They made a few mistakes here and there, but I would say it was a close game.”

“If we had not perhaps delayed and taken the shot sooner, maybe we (RI) might have converted more shots,” he added.

Similarly, Jonathan (NJC #26) shared: “The match was a tough challenge for us as the underdogs and we definitely gave our best in efforts but a few tactical and individual mistakes cost us the game.”

“RI are strong opponents, especially their Wingers who were strong and fast. Their midfield did well to control their tempo,” he said. “We planned to stay compact and stop the through balls in the middle. However, ultimately it was a deflection and a penalty that resulted in us losing 2-0.”

On their next match, Mr Lawrence said: “I think MI is a strong team, but we are ready, we are prepared and we will probably put up a good fight against MI.”

When asked about their upcoming matches, Jonathan said: “We have two matches left (one full game and one second half) and admittedly, we are not in the most favourable position. However we must do our absolute best to fight for the last six points and let the ultimate results decide our standing.”

RI are set to battle it out against Millennia Institute on Friday, while NJC are set to face Temasek Junior College next Tuesday.