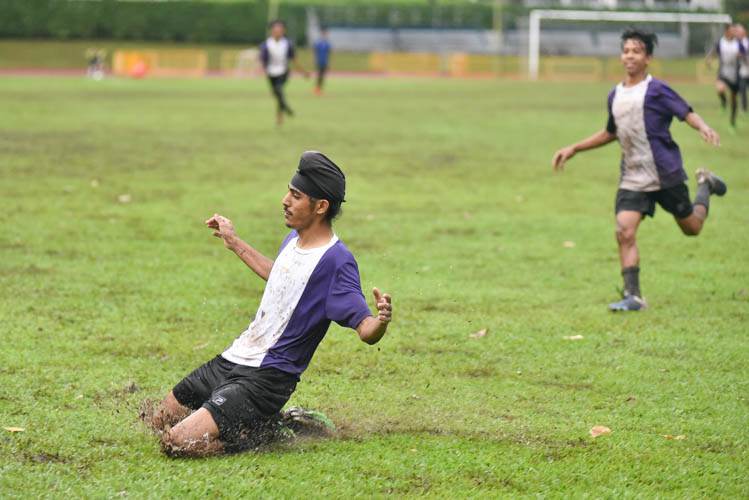 The two teams, who drew 1-1 previously in the round of 16, played out a similar scoreline in normal time of the National B Division School Premier League 2 Football final, after goals by Hong Kah’s Muhammad Danial Zulhilmi (HK #14) and Muhammad Rukaifi (QW #7).

Hong Kah’s Muhammad Hilmi (HK #9) was sent off in the 80th minute for a second bookable offence and after a goalless first period of extra time, penalties seemed inevitable until a deflected Hong Kah shot paved the way for Gur Roshan’s (HK #17) counter attack.

The graduating 17-year-old forward knew he was the closest to Hong Kah’s goal and as he picked up the deflected ball near the centre circle, he stole a glance at his defender.

“I just needed to check to see if the defender was near me,” said Gur Roshan, who is one of the three graduating players in the winning Queensway team.

Then, he took off.

With his schoolmates cheering him on from the stands, the lanky forward brushed off a challenge from his marker just outside the penalty box and knew exactly what he was going to do.

“I knew I was the last man so I know I had the pace to go on and beat the keeper,” he said after the match.

“I was quite confident, to be honest, in my ability and I remained calm and composed and managed to finish.”

When the goalkeeper came rushing out, Gur Roshan had no hesitation, lifting the ball effortlessly into the goal over the hapless Edo Ari Prandana (HK #1) for his 10th goal of the season — one shy of the top scorer mark.

The late goal in extra time capped off an evenly balanced match in which the title could have easily gone to either team. Due to the wet conditions, the earlier 3rd and 4th match had to be called off and from the kick-off, both finalists struggled to play their usual passing football.

“I think they never gave up, I know they are tired after extra time but of course we had an advantage where they are one man down,” said the 38-year-old coach.

Both teams made little headway in the first half as they get used to the pitch conditions and were unable to create much in attack. The game only sprung to life in the second half with Hong Kah taking charge.

An early mistake by the Queensway defence allowed Hong Kah to send a teasing cross into the box but Muhammad Faiz (HK #6) waited just a little bit too long as Queensway managed to clear the danger away.

Against the run of play, Muhammad Rukaifi (QW #7) capitalised on sloppy defending by Hong Kah around the hour mark, cutting in from the left and into the box. Faced against the goalkeeper, Rukaifi shot straight into the body of Edo Ari Prandana (HK #1) and the ball ricochet off the latter and into the goal.

But the lead did not last long, Hong Kah replied almost immediately with a goal through Muhammad Danial Zulhilmi (HK #14) who made a beautifully timed volley inside the box.

As the clocks wound down, however, the legs were beginning to tire and tempers were flaring up as Hong Kah found themselves down to 10-man after a second booking for Muhammad Hilmi (HK #9) just 10 minutes from full time.

The match looked like it was heading for penalties until a deflected shot by Muhammad Fauwaz B Mohamad H (HK #15) fell to Gur Roshan who turned it into the winning goal.

Hong Kah had one last-gasp chance in the dying minutes of the match when a long free kick landed in Queensway’s penalty and caused a goalmouth scramble but they could not get shot in.

Coach Mohamed Zainudeen said he could not ask for more from his boys and insisted the red card was not a big factor in the outcome of the match. In fact, the sending off helped Hong Kah to regroup and refocus their game, according to him.

“I think we played better without (Hilmi), we regrouped, we wanted fight better maybe, mentally probably it helped the team,” said the 47-year-old coach.

“No doubt we were one man down but we had a lot of attacks to finish so it was not a real deficit for us,” he added, stressing that the traditional powerhouses will learn from this match to move forward.

“This is a first time for us playing in a heavy pitch like that.. It’s an experience for the boys.”