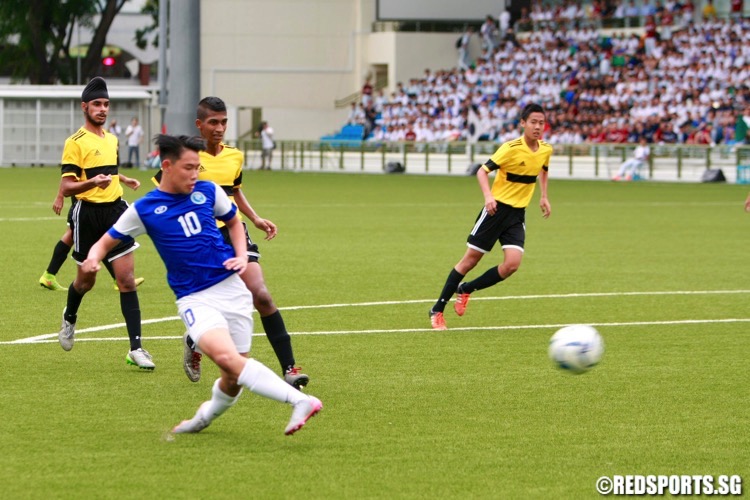 Royston Tan (MJC #10) scoring the opening goal for MJC. It turned out to be the winning goal of the game. Royston also finished the Championship as the top scorer with 19 goals. (Photo 1 © Les Tan/Red Sports)

This was MJC’s third successive title, and their seventh in the last 10 years.

This was the second time the two sides were facing each other in this year’s competition. MJC won that final Round 2 game 1-0.

MJC rolled past Raffles Institution 6-1 in the semi-finals while VJC overcame ACJC in a dramatic penalty shootout in the other semi.

Coming into this game, MJC remained the only unbeaten team in the Championship. MJC were prolific over the season, racking up 48 goals. Defensively, they let in only three goals.

VJC by contrast had only scored 15 goals this season, but conceded only just two goals.

In the seventh minute, Royston Tan (MJC #10) scored the game’s opener with a thumping strike that bulged the roof of the net. The goal came from a well-worked free kick that caught the VJC defence by surprise.

Two swift short passes found Royston Tan (MJC #10) on the right side of the penalty box and he converted the chance confidently. This was Royston’s 19th goal in the competition, and he finished the Championship as the top scorer.

MJC combined physicality and speed. The quickness on both flanks ensured that the MJC attacks were not halted by VJC’s physical challenges in the centre of the park. Meanwhile, towering striker Haziq Syamil (MJC #3) provided a different dimension to the MJC offence, winning numerous headers when MJC chose to take the more direct option.

VJC had a penalty shout dismissed by the referee when Ashwin Kalaichelvan (VJC #4) was knocked over in the penalty area.

VJC responded well to going 1-0 down early in the game. They committed players upfront and managed to test the MJC defence with a few dangerous through balls. Dashmesh Singh (VJC #16) saw his distanced try fail as it drifted away from his intended target.

An early substitution saw Bhavin Assandas (MJC #7) withdrawn for Joel Ang (MJC #5) in what looked to be a tactical reshape for MJC.

VJC’s powerful forward Karuppiah Arasu (VJC #9) was central to many of VJC’s attacks as he kept possession for his team in the attacking third. This worked to great effect as he looked for his marauding teammates to stretch MJC’s backline.

VJC goalkeeper Jonas Andersen (VJC #1) was forced into a save after Hong Seung Jun (MJC #6) headed a corner kick cross towards goal. However, his goalkeeping heroics was almost undone minutes later when he failed to come forward and collect a ball, leading to a collision with Scott Foong (#21). VJC were saved by the referee’s whistle for a foul.

As halftime neared, Justin Hui (MJC #4) delivered a curling free kick from outside the penalty area that was denied by the fingers of goalkeeper Jonas Andersen (VJC #1).

Haziq Syamil (MJC #3) came close a minute later, with his chipped shot going marginally wide of goal, a valuable chance spurned by the tallest player on the pitch.

The scoreline stayed at 1-0 as the players went into the halftime break.

The second half got underway with Nathanael Chin (MJC #9) being brandished a yellow card for a rash challenge on a VJC player.

MJC skipper Dagan Lim (MJC #25) made a fingertip save when he pushed Muhammad Sollehin (#10)’s free kick effort onto the crossbar to keep his team’s lead intact.

Royston Tan (MJC #10) made a darting run down the left wing and saw his shot parried away by goalkeeper Jonas Andersen (VJC #1). Nathanael Chin’s (MJC #9) rebounded shot then hit the wrong side of the net.

MJC looked to have made it 2-0 when Justin Hui (MJC #4) put the ball into the VJC goal. He wheeled away in celebration only to realize that he was ruled offside.

VJC replied with attacks of their own, as captain Ahmad Taufiq (VJC #19) hit a low volley that was palmed away by MJC captain Dagan Lim (MJC #25) for a corner.

Ryan Chen (VJC #6), scorer of the winning penalty against ACJC, almost made it 1-1 when he found himself unmarked just outside the six-yard box. However, his strike went narrowly wide of goal, to groans from VJC players and fans.

The full-time whistle went and MJC’s single goal was enough to decide the contest. VJC found themselves on the wrong side of a 1-0 scoreline once again against MJC, despite a spirited performance.

Royston Tan (MJC #10) said, “It is a fantastic feeling, after working hard on the field, we finally made it and became champions. It feels surreal (to score the winning goal), never thought it would happen, but it did. Just want to thank my teammates for their hard work and their team spirit for fighting all the way till the end.”

MJC captain Dagan Lim (MJC #25) said, “It feels very very good. I think we deserved to win this title because we put in a lot of effort, sacrificed a lot of things and worked our socks off. At the end of the day, we got what we deserved because of our hard work.”

“Our pre-game preparations was usual. We came into this game thinking that it is an ordinary game. If we treat this game like it is a very important game, we will feel over-pressured. In the end we managed to get the goal, and it paid off,” he added.

When quizzed on what was going through his head in the final few minutes, he said “It was very tough, I made sure everybody was together as a unit, made sure everybody communicated well, so that there were no gaps for VJC to exploit. VJC played very well, and attacked very well. Luckily for us, we defended well and the goal didn’t come.”

In a message to his teammates, Dagan added, “For me the Championship does not even matter, as long as you all stick together and are brothers first. It is because of our brotherhood and our unity that makes us champions.”