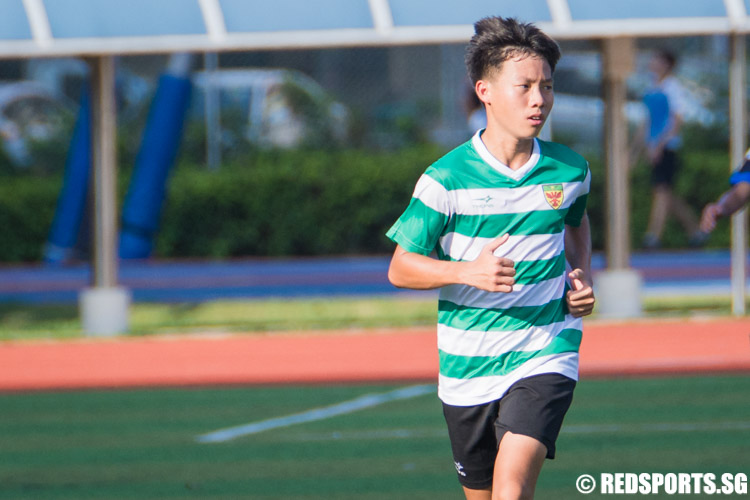 After coming away with a spectacular 8-0 win over Yishun Junior College to secure dramatic qualification to Round 2, RI came into this game brimming with confidence. Last year’s finalist, NYJC were also in fine form, finishing top of their group in Round 1 of the competition.

NYJC started the game strongly, immediately pressuring RI with swift passing and intelligent off the ball movement. NYJC had their first attempt on goal within the first minute. Kiefer Tay (NYJC #11) ran down the right wing and delivered a dangerous ball into the centre of the box. Christian Rodrigues (NYJC #3) hit the ball with too much power and it flew over the goal.

RI managed to break forward occasionally, but struggled to keep up with the pace set by NYJC. Christian Rodrigues (NYJC #3) used his pace again to devastating effect, as he skipped past four defenders with a skillful dribble. The eventual cross was blocked out by the RI defence.

RI kept themselves in the game with disciplined defending, working tirelessly to keep NYJC out.

RI were awarded a penalty against the run of play when the referee blew the whistle for a handball in the box. Foo Jun Kit (RI #17) sent the keeper the wrong way, slotting home the penalty confidently.

Loon Qing Xiang (NYJC #16) then missed a valuable chance to level the game, as his close ranged lob missed the target.

In another attack, NYJC left winger Kaloyan Caluodov (NYJC #14) received a pinpoint cross from midfield, before firing a venomous left-footed shot that strayed wide of goal. NYJC continued to create chances without an end product.

RI were solid in defence, but more often than not the offensive players found themselves stranded up top. The lack of support in the attacking third meant that they had to rely on counter attacks to break past the NYJC defence.

Edward Quah (RI #13) came close with a curling effort that was lacking in accuracy, marking the end of the first half.

The match restarted in the second half with NYJC on top, pressurizing the RI defence. However, their ineffectiveness in front of goal continued to deny them the elusive equalizing goal.

As the game wore on, NYJC’s desperation for a goal led to many rushed efforts. RI defence stood strong, communicating well to keep their defensive shape intact.

NYJC’s attacks began to slow, as their high intensity play started to take a toll. As a result of that, they started employing a more direct brand of play, using long balls to reach the front men.

As the game neared its end, RI forwards looked to run down the clock by heading towards the corner flag, rather than to risk losing possession and be hit on the counter attack.

NYJC came as close as they possibly could when Kendrick Ong (NYJC #20) brought the ball past the goalkeeper and only had to pass the ball into the open goal. But the ball was poked out for a corner after an RI defender sprinted back to intercept. NYJC fell short once again.

The game approached its final minutes as NYJC captain and goalkeeper Mohammad Ilyasa (NYJC #13) courageously ran out to the halfway line in open play, to deliver crosses for his team.

The RI team repelled the attacks until the final whistle went, and they erupted in celebration after securing the valuable three points. The NYJC team was applauded off the field by the home crowd, as the players were left to rue the opportunities they squandered.

RI captain Ashwin Unnithan (RI #14) commented, “It was very tough. We always knew NYJC were going to be tough opponents. Coming into this game we knew we had to put our hundred percent in order to get a result and that was exactly what we did. We will take it one game at a time, and hopefully get another result on Friday. The aim is to go as far as we can.”

NYJC captain Mohammad Ilyasa (NYJC #13) reflected on the match, “We didn’t start off that well. We had a lot of chances in the first half but we did not make them count. We dug deep and tried our very best to find a goal, but to no avail.”

When quizzed on his attacking contribution as a goalkeeper at the end of the match, he added, “We had to get the goal, and get up the field as efficiently as possible. And if I could do it myself, I will do anything for this team.”

RI take on Anglo-Chinese Junior College in their next game, and NYJC will look to reverse their fortunes against Temasek Junior College.