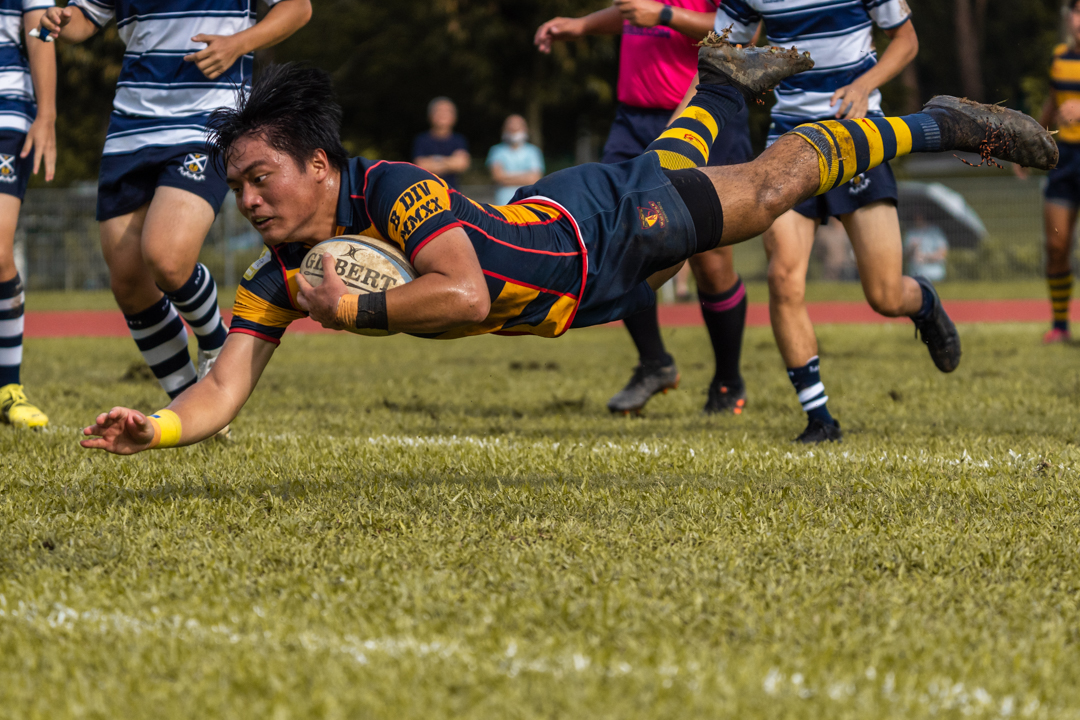 ACS(I) beat the Saints 31-0 and 45-5 in two 7-a-side matches, instead of the usual 15-a-side rugby union matches. The ACSians will play Raffles Institution in the final scheduled for May 6 in a repeat of the last A Division final played in 2019, prior to the Covid-19 pandemic.

The return of NSG rugby this year brought with it some changes. Every school fields two teams of 15 registered players each. The first team plays a match of 7-minute halves against the that of the opposing team, while another set of players play against each other in the second match. The winning school team is the one with the higher aggregate points total.

ACS(I) struck first in the first match, with Jeremiah Williams (#16) drawing in the last two players on the Saints defence, creating space for Julian Wong (#14) to make a convincing run down the left wing. Wong slid into goal and grounded the ball, opening Match 1 with its first try. The try was converted by kicker Tycen Yeoh (#26).

From there came a succession of tries by Yeoh, who exploited the gaps in Saints’ defence in open play. Yeoh took both conversions but missed one. Braydon Yu (#13) added another try to the score board for Independent with a line break from centre field.

The first match closed with a long pass by Independent’s Jeffrey Lee (#10) that found winger Ryan Lim (#11). Lim then blazed 50 metres down the left wing to ground the ball between the posts. A successful conversion by Yeoh saw the first match end 31-0 in favour of the boys in blue and gold.

Continuing their assault into the second game, ACS(I) began the match with a team try that saw the ball passed, in contact, through the entire back line before ending up with Garcia Hans (#48). Hans carried the ball the last 10 metres, scoring the first try of Match 2. A successful conversion by kicker Bryant Sim (#6) gave Independent a 7-0 lead.

Independent’s Jacob Tan (#20) and Marcus Tay (#7) both added a try apiece, while Eric Chi (#15) eventually ended the match with three tries. Sim managed to only convert two of those four tries.

Exploiting a gap in the sliding Saint’s defence off a ruck, Sim took a cheeky pick-and-go on the open side, grounding the ball in goal. Sim further successfully converted his try.

Saints’ Ryan Sing (#24) scored a consolatory try that would be the only points which SAJC put on the board in the semi-final.